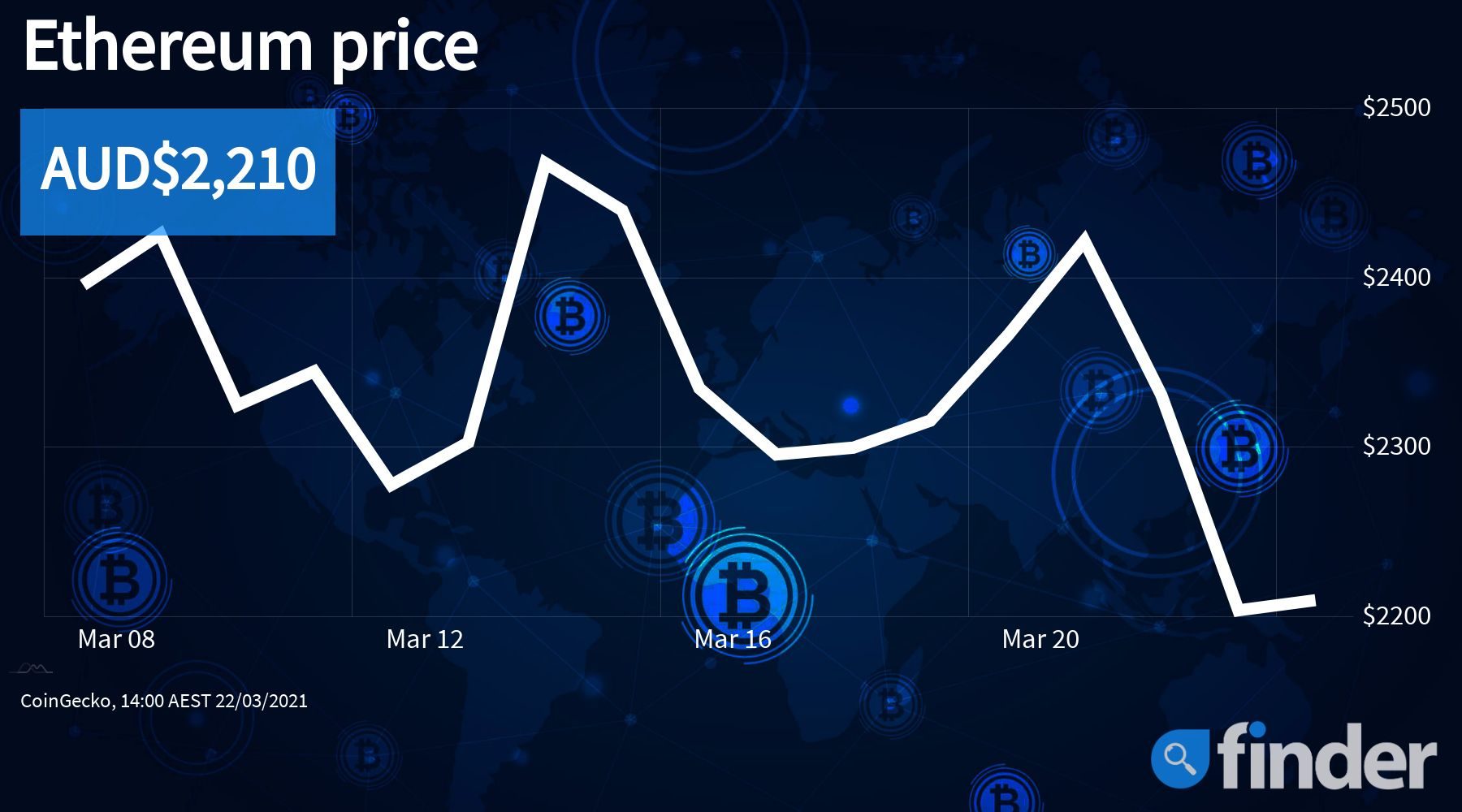 Can Ethereum’s price survive without a scaling solution?

Experts are bearish on Ethereum’s near-term future as the network’s congestion and fee issues have continued to mount.

After sliding from the AUD$2,365 mark on 22 March, Ether, the second-largest cryptocurrency by total market capitalisation has proceeded to showcase an increasing amount of stability around the $2,165 – $2,230 range over the course of the last 48 odd hours. At press time, the altcoin is trading at $2,195.

While ETH has been able to demonstrate decent market resistance during the last 30-day trade cycle, it has become abundantly clear that the currency’s price action is once again largely being dictated by that of Bitcoin, especially as the altcoin continues to be faced with an increasing amount of criticism in regard to its congestion and high transaction fee.

Speaking with Jason Fernandes, president (India operations) for cryptocurrency exchange XREX, he told Finder that the fee issue is a potent one for Ethereum, with there being too much competition within this space at the moment (especially from other blockchains like Cardano and Polkadot).

In his view, for Ethereum to still be a viable option for developers, gas fees cannot remain at the rates they are at today, and considering the fact that Ethereum 2.0 will likely take some time to roll out completely, it will be tough for the digital asset to stay on top. He added:

“I think Ethereum will languish in the AUD$2,635 – $2,495 range or less in the near future. I do not see a breakout beyond $2,625 coming up soon, but if it does it will likely be short-lived. Ethereum’s price appears to be self-correcting. High fees will cause developers to flee to other blockchain solutions and the traders inevitably follow the developers.”

Network activity is often considered one of the best metrics to judge a blockchain and historically speaking, network activity has always dropped whenever gas fees have risen beyond a certain point. In this regard, Fernandes opined that one would have thought that with the growth of the NFT and DeFi space, Ethereum would have benefited immensely, however, that has, by and large, not been the case since the DeFi boom has led to an influx of users that have simply pushed up congestion level to even more questionable levels.

Is Ethereum shooting itself in the foot?

As highlighted by Finder earlier, with each passing day, a number of prominent DeFi projects seem to be transitioning to other rival blockchains that are compatible with the Ethereum Virtual Machine (EVM). For example, over the course of the last couple of months, Harvest Finance, SushiSwap and Value DeFi have all expanded their operations to Ether alternatives as a result of the platform’s rising fee rates.

Providing his thoughts on the subject, Petr Kozyakov, co-founder and CBDO of the global payment network Mercuryo, pointed out to Finder that Ethereum’s mounting challenges have served as a perfect marketing storm for alternative DeFi-oriented blockchain networks including Polkadot, Cardano and the Binance Smart Chain, especially as these platforms have worked to address many of the issues that Ether devs are still working to solve, adding:

“The potential future relevance of either of these blockchains in relation to that of Ethereum will be defined by the continuous strides in churning out new innovation and the mainstream adoption of each network will get in the longer term. If Ethereum rests on its oars, a scenario that is unlikely, it stands the risk of being overtaken in the long run.”

Similarly, Varun Satyam, co-founder of Bitlumex, a PR newswire for blockchain and crypto products, told Finder that with each passing day Ether is continuing to lose a massive amount of trust within the global trading community, especially in relation to BTC and other prominent altcoins.

And even though the currency boasts of one of the largest developer communities in the world today, he believes that if things go on like this for too long, ETH could very well be replaced by a number of other layer-1 solutions that are already available in the market. Satyam added:

“Other layer-1 solutions definitely have open ground for massive adoption offering better scalability and lower fees. More community members may move towards these offerings in the near future. I see Solana as being an excellent layer-1 solution that has the potential to overthrow ETH in the coming few years if things don’t change soon.”

As Ethereum continues to once again trade sideways after showcasing a dip on 22 March, it bears mentioning that the currency has continued to exhibit rising average transaction (tx) fees, with the price of facilitating a tx on the network presently hovering at $20, making the network pretty much unusable for the average customer. 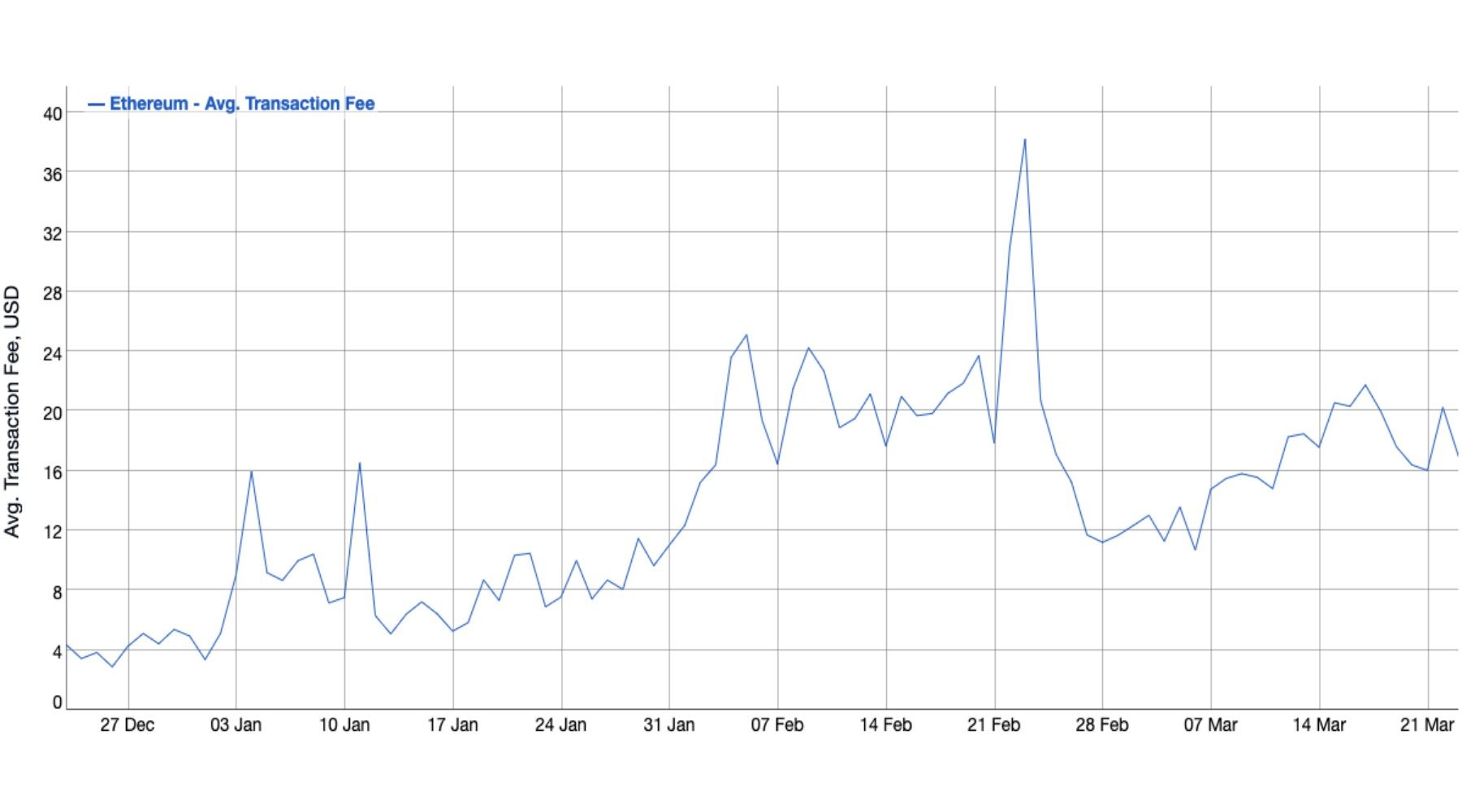 As can be seen from the chart above, transaction fees on the Ether network have continued to hover above the $16 mark since the start of February, with the trend most likely to continue as more and more people continue to explore the Non-Fungible Token (NFT) market. To elaborate on the explosive growth of this yet nascent space, Jack Dorsey, CEO of social media giant Twitter, recently sold his first-ever tweet in the form of an NFT for a whopping $2.9 million.

The NFT space has garnered so much mainstream traction recently that a number of celebrities have started to cash in on the ongoing hype, digitising many of their creations and selling them to people across the globe. The market has witnessed so much monetary inflow in recent months that its total capitalisation has risen to nearly fifty billion dollars, in what seems like just a couple of months.