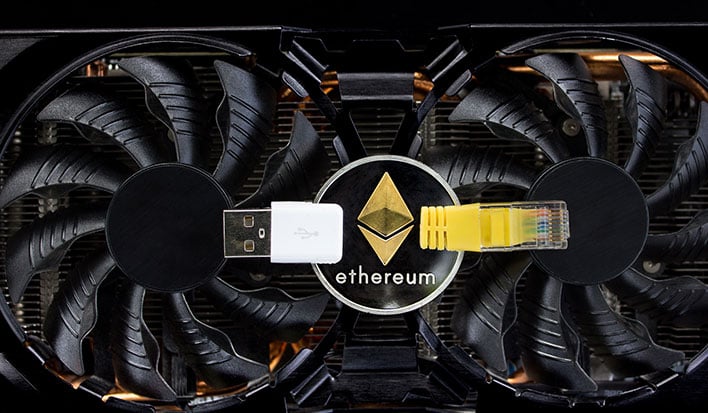 Delayed Ethereum 2.0 Merger Is A Crushing Blow For PC Gamers Hunting For A GPU

A major update headed to the Ethereum blockchain is supposed to be great news for PC gamers, as it would virtually eliminate the demand for GPUs from Eth miners. And it was supposed to happen in December. Unfortunately, the developers overseeing the full transition to Ethereum 2.0 feel the update is not quite ready, and won’t be until next summer at the earliest. Drats!
The move to Ethereum 2.0 is a multi-phase transition, and it has already begun. However, it is the eventual shift from a proof-of-work to a proof-of-stake model that is the overhaul PC gamers have been waiting for, and that promises a massive 99.95 percent reduction in energy consumption. The because the latter would no longer reward gamers for solving complex math equations with their GPU hardware, and instead the network would verify transactions (called blocks) based on a person’s existing stake in Ethereum.

In a perfect world, this would ultimately result in more GPUs finding their way into the hands of gamers for actually playing games instead of mining. But of course that’s an overly optimistic take. There are other coins that can be mined with GPUs, like Ravencoin, so it’s doubtful that GPU mining will go the way of the dodo. Additionally, there’s really no way to accurately quantify the impact Ethereum is having on the shortage.

Anecdotally, I have a friend who went from knowing absolutely nothing about cryptocurrency, to procuring around a dozen graphics cards over the past year or so, to mine crypto (he enlisted help from friends and family during Best Buy’s occasional restocks). Most of what he mines is Ethereum. I only mention this because I’m sure he’s not the only semi-casual miner to embark on this path.

Then there’s Ethereum’s rising value. It reach a record high this week, topping $4,400 for the first time ever. Around this same time last year, Ethereum was trading at under $400. So that’s a better than 1,000 percent gain in 12 months.

As for the upcoming change, which is referred to as the “difficulty bomb,” this is yet another delay. Developer Tim Beiko confirmed the delay on GitHub in an Improvement Proposal update (EIP-4345). The delay is set for June 2022, or even later, depending on how things go (this is not the first delay).
“Even though the merge testing is going well, it isn’t going to happen until the difficulty bomb is due to go off again (early December, as per EIP-3554). We are not ~1 month away from having client releases ready for the merge, so we need to push the bomb back again,” Beiko stated earlier this month.

That’s a bummer for PC gamers, though even when the bomb goes off, it’s highly unlikely the market will be flush with graphics cards again.