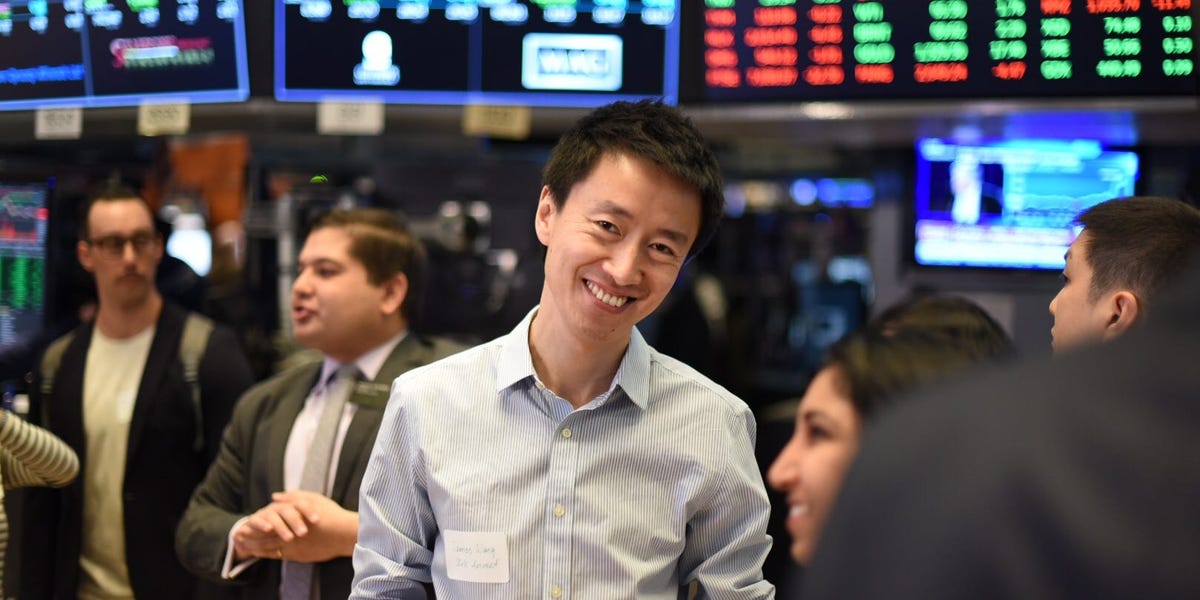 When James Wang joined Cathie Wood’s Ark Invest as an analyst in 2015, the startup had about $20 million in assets under management. By the time he left, the storied money manager had grown into a multi-billion-dollar firm.

Now, as the head of tokens at Amun, Wang is hoping to witness a similar type of exponential growth at the decentralized finance-focused crypto asset manager.

“It’s starting all over again, which is both scary and exciting,” he said in an interview. “I think the most gratifying part is going from zero to one to really get it off the ground.”

Wang has no doubt about the growth potential of decentralized finance, especially the DeFi applications built on top of the Ethereum network. An early ether bull given his tech background, Wang has held the belief that ether could reach as high as $40,000, which is a valuation framework laid out by Arthur Hayes, the former CEO of the crypto exchange BitMEX. The crypto hit a record high above $4,400 on Friday.

Over the past few months, he has become more confident about Ethereum even as rival layer-one protocols including Solana, Polkadot, Cardano, and Avalanche have sprung up and surged in popularity. In his view, these competing chains are basically “copy-and-paste versions of the Ethereum protocol” in terms of core concepts, use cases, and business models.

But it’s the resilience of Ethereum in the face of all this competition that he finds the most remarkable.

While the amount of total value locked on Ethereum for DeFi has fallen to about 70% of market share from about 99% six months ago, many of the protocols that Ethereum has lost share to are “heavily incentivized,” Wang said. He was referring to the various incentive programs set up by competing protocols to attractive DeFi applications to move to their chains.

“They are basically giving away free money,'” he said. “By that very raw brute force method, they have been able to attract some capital, but this capital tends to be very mercenary. This capital will chase wherever is the highest yield, go between chains, and flip very often.”

How Ethereum could reach $10k by yearend

On the other hand, Ethereum, which already has the “most mature software developer ecosystem,” continues to go through major technical improvements.

As more layer-two solutions and rollups are deployed on the Ethereum blockchain over the next year, the price of transactions on the network will drop to levels lower than those of the competitors, according to Wang. The highly anticipated merge between Ethereum’s mainnet and beacon chain in mid-2022, which will see the network officially transition to proof-of-stake from proof-of-work, could also completely change the narrative and see ether’s price “go ballistic and haywire,” he said.

“The trajectory that Ethereum is on for the next year is really unparalleled in its history,” he said. “If it can get there, I think the relative competitive gap between Ethereum and the other layer-ones will widen dramatically. And then we will really see the market start valuing them on a fair basis.”

In the near term, Ethereum has greatly benefitted from the rollout of EIP-1559, a major upgrade to the network that has helped burn 660,609 ether tokens worth about $2.8 billion, as of Thursday afternoon. Meanwhile, ether, which was trading at $4,249, has been tracking the 2017 price action of bitcoin, which surged to $20,000 from $1,000 mostly in the fourth quarter of that year, as Real Vision CEO Raoul Pal recently pointed out.

“I think we could easily hit $10k this year with some positive price action,” Wang said.

Since the “DeFi summer” last year, non-fungible tokens have been stealing the show. But Wang said there has been a “mini DeFi resurgence” or “DeFi 2.0” in the last couple of weeks.

liquidity
for their users so that they can trade their tokens,” Wang said.

OlympusDAO is a decentralized autonomous organization that has created its native token OHM as a free-floating currency or algorithmic stablecoin. This means the token is backed by a basket of decentralized assets instead of being pegged to the dollar or any fiat currency. The protocol has caught the attention of many crypto traders due to its stunningly high 8,159% staking APY. The OHM token has surged 88.3% in the past 30 days, according to CoinGecko.

Abracadabra is a lending platform that allows users to deposit their interest-bearing tokens as collateral in order to borrow its multi-chain stablecoin Magic Internet Money (MIM). It aims to help traders unlock liquidity in interest-bearing tokens that they already own but cannot use. Like all DeFi borrowing and lending protocols, the project is subject to liquidation risk, smart-contract bugs, and exploits, according to its Medium page.

Tokemak is a decentralized liquidity network and market-making protocol that aims to create sustainable DeFi liquidity and capital-efficient markets. Its native token has surged 60.9% in the past month.