Cryptocurrencies have given us a real ride lately. Bitcoin (CCC:BTC-USD), Ethereum (CCC:ETH-USD) and others have been buried in the recent bear market. However, they have shown some life lately.

On Tuesday morning, I flagged a trade setup in both Bitcoin and Ethereum, as the two main cryptos finally gave us a nice dip. But let’s back up a little bit, because it wasn’t that long ago that the entire space was on the verge of a major breakdown.

Bitcoin was flirting with a move below $30,000, while Ethereum was threatening to break below $1,750. I’m not going to lie, the charts looked pretty terrible. Apparently they were so bad, they were a buy.

On July 21, “The B Word” conference kicked off, which included the likes of Ark’s Cathie Wood, Tesla’s (NASDAQ:TSLA) Elon Musk and Square (NYSE:SQ) and Twitter’s (NYSE:TWTR) Jack Dorsey. That apparently gave bulls the confidence they needed, as this space has been on fire since.

Let’s look at the setup. 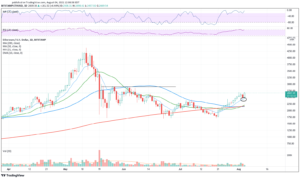 Ethereum bottomed around $1,750 just as it looked like it was going to break lower. The crypto kept trading down into this area and was holding it as support, but it was trending lower. It looked like an eventual breakdown was coming.

However, support held as Ethereum then pushed back up through its key moving averages and marched toward $2,700, up more than 50% in a relatively short span.

Now pulling back, I’m looking for a test of the 10-day moving average for a buying opportunity. Currently, that comes into play near $2,420. A bounce from this area puts $2,700 back in play, followed by a potential rally up to $2,900.

So there you have it, that’s our trade setup in Ethereum.

I am not personally a mega-bull in crypto. I believe it has a future and it has plenty of potential, but I don’t necessarily think it will replace fiat currencies. At least, I don’t expect that to be the case anytime soon.

That said, I think many cryptos will fade away, many will emerge and some will be mainstay leaders. In the last group, I expect Bitcoin and Ethereum to be two cryptos that have long-term viability. As Investopedia points out, “Ether was intended to complement rather than compete with bitcoin, but it has nonetheless emerged as a competitor on cryptocurrency exchanges.”

While Bitcoin was created as an alternative to paper currencies (thus acting as a store of value), it’s not very practical when it comes to actually using it. It takes a long time to verify a purchase and it makes transactions too slow. Compare that to something like a credit card purchase — or even Ethereum — and Bitcoin seems too slow for real-world applications.

When it comes to Ethereum though, there are plenty of applications. For example, Ethereum operates as a Decentralized Finance (DeFi) platform, while also executing what are called smart contracts. That’s “a coded contract that can execute itself automatically when certain conditions are met. Imagine an insurance policy that paid out without you needing to even make a claim.’”

Because of the way these assets trade though, Ethereum is also acting as a store of value — investors are buying it to see a gain. At the same time, I do believe in Ether’s future though because it has far more applicable use cases than its peers and it’s widely acknowledged by many investors.

So what’s the bottom line? If you’re looking for some exposure to Ethereum and believe in its future, overlay some technicals to the picture and use the dip to get long.