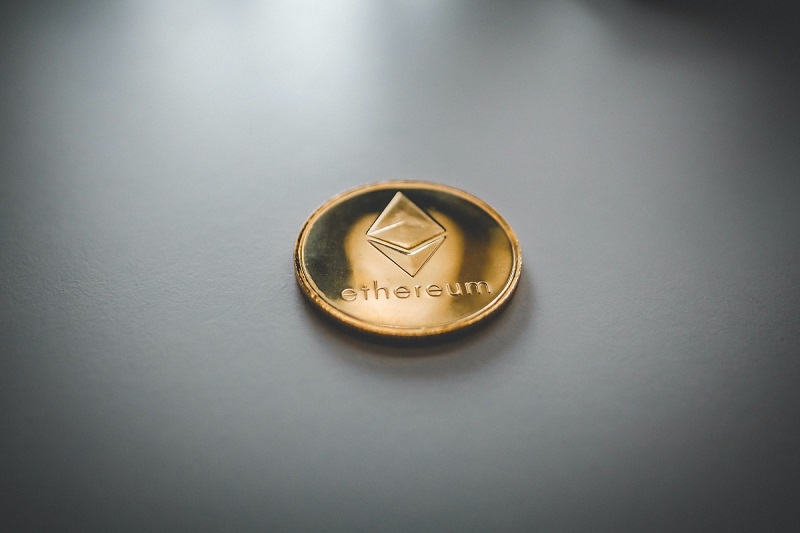 The Promise and Peril of Ethereum, Part II

In my last article, I covered some of the basics of Ethereum for investors curious about the cryptocurrency space. This article will focus on ether (the official name for the Ethereum protocol’s native currency) as an investment asset.

Ether is so volatile that you could argue (and crypto aficionados probably will) that it doesn’t really fit into a traditional portfolio analysis framework. It’s more of a speculative play on the long-term shift toward digital money and an ongoing revolution in the financial technology landscape. Even so, investors tempted to make a bet on ether should proceed with caution and keep in mind that even small doses of ether can dramatically change a portfolio’s risk profile.

From an investment perspective, the case for ether is decidedly mixed. Investors who got in early have literally made millions, as shown in the chart below. But ether has shown even more volatile price moves than bitcoin, with runups as large as 9,900% in 2017 (no, that’s not a typo), followed by an 82% loss in 2018. Like other cryptocurrencies, ether has also been subject to extreme price swings over the past few months. In the third week of May, for example, ether’s price dropped about 38%, although it has since recovered most of its losses.

This high level of price volatility makes ether more difficult to own than bitcoin. Over the past five years, in fact, ether’s standard deviation has been more than 9 times as high as that of the Morningstar U.S. Market Index, a broad benchmark of U.S. stocks, and close to double that of bitcoin.

To quantify ether’s potential impact as a portfolio addition, I looked at the impact of adding different percentages of ether (using the CMBI Ethereum Index as a proxy for ether) to a portfolio combining an 80% weighting in the Morningstar U.S. Market Index and 20% in the Morningstar U.S. Core Bond Index. In each case, I took the cryptocurrency allocation out of the portfolio’s equity weighting, keeping the bond weighting constant.

As the chart below illustrates, a little bit of ether goes a long way. Although ether’s generally low correlation with both stocks and bonds helps mitigate the impact of its stratospheric volatility when combined with traditional portfolio holdings, it still doesn’t take much exposure to dramatically alter a portfolio’s risk profile. (This finding is similar to what my colleague Adam Millson found in his recent study testing the impact of various bitcoin weightings on a traditional 60/40 portfolio). In fact, even a paltry 2% stake in ether would have more than doubled the portfolio’s standard deviation over the trailing five-year period ended in June 2021. 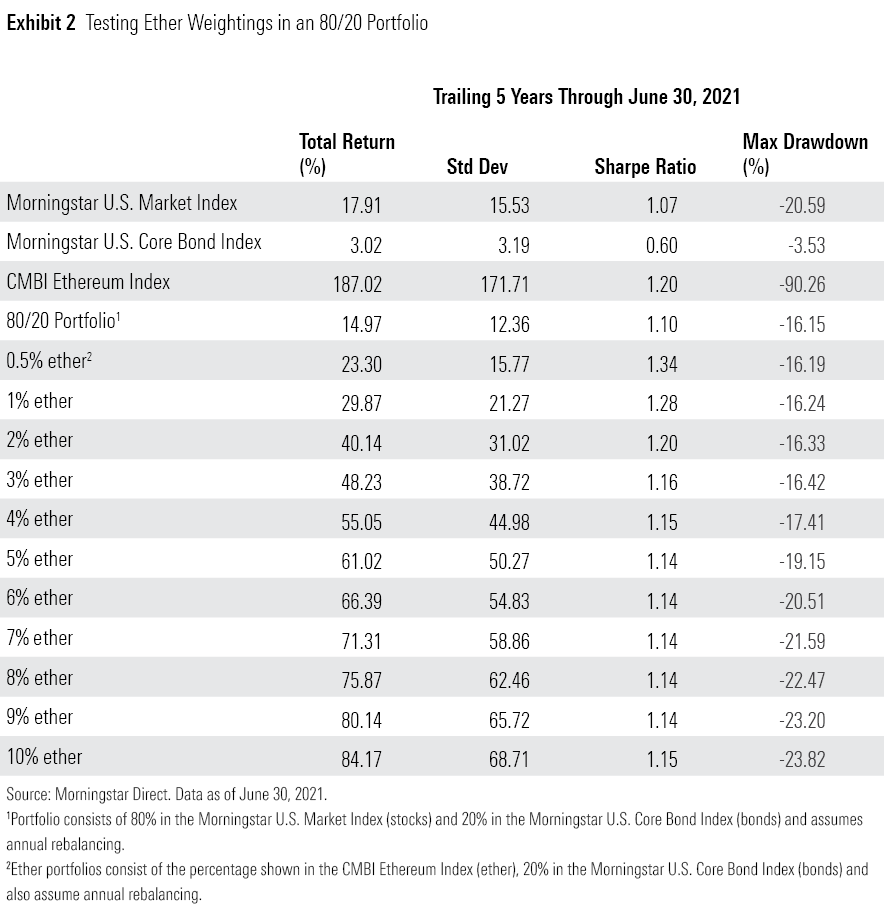 Investors willing to take on the extra risk would have reaped ample rewards: A 2% ether stake would have more than doubled the portfolio’s annualized returns over the five-year period. On a risk-adjusted basis, though, a tiny sliver of ether looked the best. The portfolio that allocated just 0.5% of assets to ether ended up with the highest Sharpe ratio.

Ether’s Role in a Diversified Portfolio

Of course, ether’s portfolio performance will likely be different over the next five years. For one, volatility has declined somewhat as cryptocurrencies have moved more toward the mainstream. For the trailing three-year period, ether’s monthly standard deviation averaged 107.5%, compared with 81.1% for bitcoin and 19.3% for the Morningstar U.S. Market Index. That’s still high in absolute terms, but enough of a decline to make ether look more attractive from a portfolio perspective in recent years (despite its sharp drop over the past couple of months).

The role ether can play in a diversified portfolio will also depend on shifts in correlation trends. Over the past five years, ether has had very low correlations with most major asset classes, as shown in the chart below. Its correlation versus both U.S. stocks and bonds, for example, was just 0.12. Like bitcoin, ether has also shown a negative correlation with the U.S. dollar, making it a potentially valuable hedge against long-term weakness in the greenback. 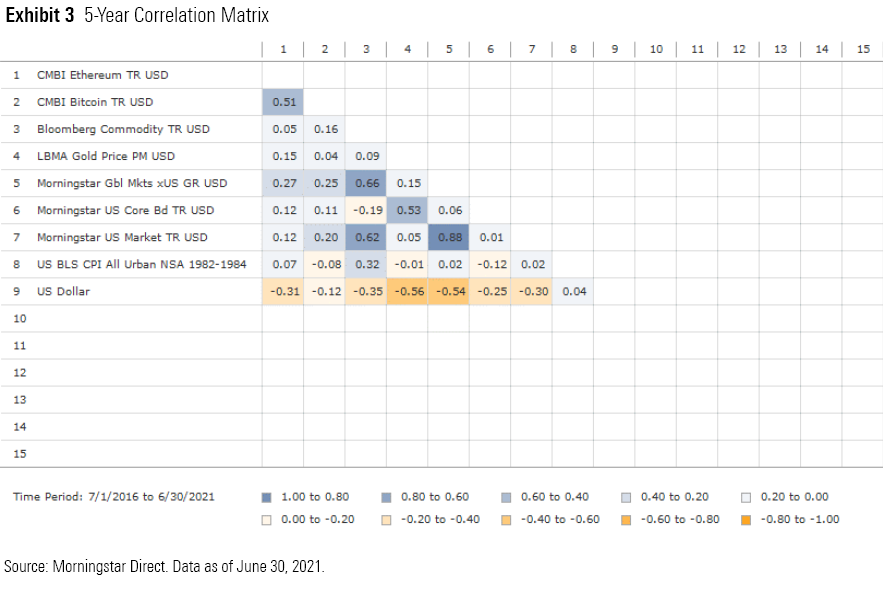 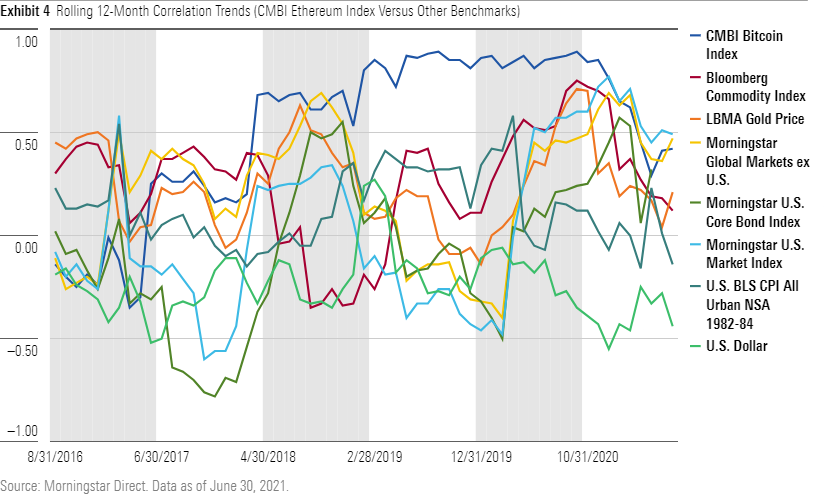 Despite its huge gains in the past, ether’s extreme volatility will likely rule it out for many conventional investors. As with bitcoin, it’s also difficult to pin down what its underlying value should be because it doesn’t generate cash flows. Its price is largely based on what investors are willing to pay, which can change dramatically from week to week or even day to day. On the positive side, ether fills a unique role in the cryptocurrency space. While bitcoin mainly serves as a digital currency and store of value, ether also functions as a utility. As I discussed in my previous article, it’s used to fuel computing power on the network, execute smart contracts, and compensate the miners who validate and verify transactions to add to the blockchain. This utility function should support ongoing demand and provide a (theoretical) price floor.

Ethereum Improvement Protocol 1559, which is scheduled to be implemented in August, should also make ether more attractive. Among other things, EIP will “burn” a small amount of ether whenever someone makes a transaction, effectively reducing ether’s supply and increasing its value over time.

For now, though, ether remains a pretty speculative investment asset. For conventional investors, it’s probably best used in (very) small doses as a hedge against weakness in the dollar and major disruptions in the global financial system.

To view this article, become a Morningstar Basic member.