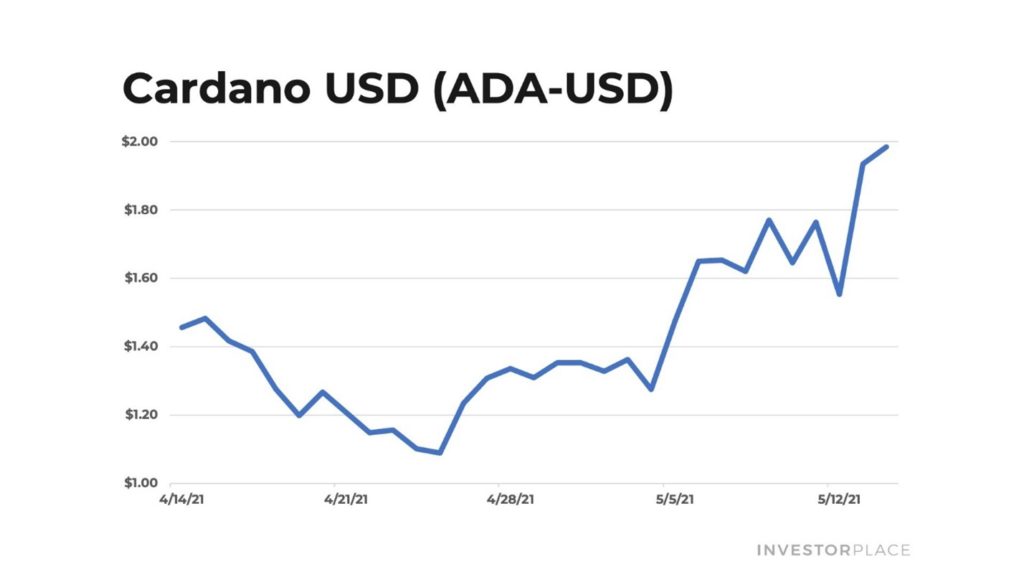 A healthy dose of skepticism — the basis of peer review — solidifies our understanding of difficult subjects. Whether we’re asking critical questions about religion, as seen in the Pew Research Center finding that atheism is slowly but surely on the rise in the U.S., or about crytocurrencies, like Cardano (CCC:ADA-USD).

When you look beyond the superficial reasons to consider ADA coins — their “cheap” price, the backing from popular personalities — you’ll invariably come across the core reason for putting your dollars at risk: the protocol behind Cardano operates via Proof of Stake (PoS). A very long story short, the decentralized verification process that undergirds virtually all blockchain-based networks emphasizes stake in the system over raw computing power.

Many see PoS as the holy grail of mass-scale cryptocurrency integration because the environmental impact of crypto mining tied to Proof-of-Work (PoW) protocols is onerous, especially compared to the benefit: crypto valuations can drop to zero and ADA is no different. However, at least Cardano won’t impose as large a footprint on the environment as many other digital assets.

While an intriguing concept, the issue with Cardano and the legions of cryptos out there is the lack of correlation between positive fundamental sentiment and profitable technical trajectories. For instance, Bitcoin (CCC:BTC-USD) is flying right now, on the cusp of reaching and possibly breaking its all-time high.

On the other hand, Cardano is stuck in a consolidation pattern. Now, it’s very possible that because of the funneling triangular nature of this consolidation, a breakout move could occur. But it’s also in my view a do-or-die moment.

All the great stuff people say about ADA won’t matter if it can’t deliver the upside.

Cardano is a Trade, Not a Manifesto

When you look at various crypto-related services, you’ll often hear the encouragement to be your own banker. You may be surprised to learn that this concept is not a new one. Indeed, precious-metal bulls have been supporting this thesis for years if not decades.

Of course, I understand both perspectives. Because fiat currencies tend to ebb and flow with domestic and global economic conditions, a measure of uncertainty is baked into the system. But by putting your money outside the system — whether gold or cryptos or baseball cards — you become your own banker, I guess.

But here’s a question you should ask before you buy Cardano or any other crypto: Is being your own banker actually a good thing?

When you take a seemingly profound concept but juxtapose it to other circumstances, you can better see the viability or the nuances of the original proposition. For instance, you don’t see too many advertisements recommending people to be their own plumbers.

Case in point, I had a plumbing issue at home that I knew I could resolve but my wife insisted that I call a plumber to address. Of course, my ego would not allow such a thing and I ended up resolving the matter on my own. However, it came at great cost to hours lost and sanity expended via impolite utterances.

So, two lessons here: gentlemen, listen to your wives because sometimes they make sense. I mean, they make sense all the time but you know what I’m saying. Number two, while you can do it (said best in a Rob Schneider voicing), sometimes, you probably shouldn’t.

Banking is one of those disciplines. It’s difficult. That’s why you outsource this and other specialties to the professionals.

Like a giant ship sinking in reverse, I suppose it’s theoretically possible for Cardano to be sucked up and out of its consolidation phase. As well, the law of small numbers — the equivalent of putting your car into neutral while getting towed as opposed to putting it into gear — should help ADA’s cause.

Still, I would take a modest bet since the fundamentals of blockchain technology will take many more years to really make a dent in mainstream society. Like I illustrated above, the being your own banker idea is not attractive for the masses when you break it down. As well, the smaller profile of Cardano compared to a Bitcoin makes the argument about its proof-of-stake protocol less consequential.

What we’re left with is that ADA is bolstered by speculation. That’s not a bad thing per say but you should be aware that like a sugar rush, the crash can be a tough one.

On the date of publication, Josh Enomoto held a LONG position in ADA and BTC. The opinions expressed in this article are those of the writer, subject to the InvestorPlace.com Publishing Guidelines.