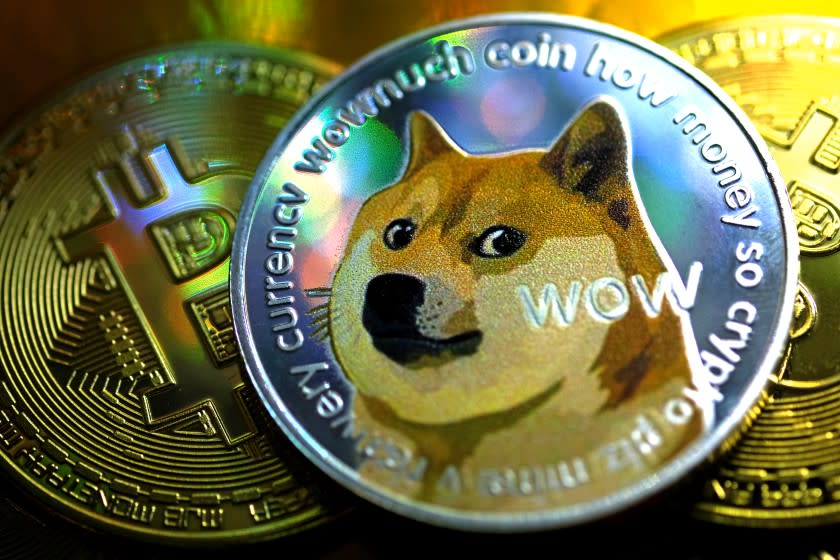 Bitcoin, dogecoin, NFTs, GameStop — is this the peak of investment absurdity?

The textbooks say that the securities markets exist to facilitate raising capital so that companies can thrive.

Business news pages and cable shows are dominated by fads — be it bitcoin, dogecoin or nonfungible tokens (NFTs) — and stocks whose prices are not tied to sober reflections about their issuers’ prospects but rocket up and down based on internet-fueled speculation.

Looking back at this period in a decade, we’ll say there was a lot of mania, but we might be surprised at what turned out to be valuable, and what didn’t.

“There are so many bubbles out there that I can’t even write about them all,” says Susan Webber, an investment advisor who as “Yves Smith” tracks business mishaps and misdeeds on her website Naked Capitalism. “They’re so loony.”

Have we reached peak absurdity in the financial markets?

Among the drivers of some of this action are figures one can describe only as “influencers.” They include traders who can stampede herds of followers through tips on internet message boards, and also Elon Musk.

The CEO of Tesla Inc. has more than 54 million followers on Twitter. Many are true believers in Musk’s personal hobbyhorses, which include the near-term advent of self-driving cars and the populating of Mars as a second home for the human race.

That the mercurial Musk’s tweets can whipsaw investment prices became evident in just the last few days. Late Wednesday, Musk announced on Twitter that Tesla, reversing an earlier policy, would not accept bitcoin as payment for its cars.

The announcement drove bitcoin’s price down by about 16%, to $46,000, in the space of two hours before it recovered to about $48,200, where it sits as of this writing, according to Coinbase.

A few days earlier, a “Saturday Night Live” character played by Musk, the show’s host for the week, declared dogecoin a “hustle.”

The cryptocurrency, whose creators had conceived it as a parodic gloss on bitcoin using the shiba inu breed of dog as its icon, had accumulated a mass of followers thanks in part to Musk’s own tweets about it. Dogecoin promptly lost almost 40% of its value.

In historical terms, the public’s fascination with new and untested investments isn’t new. But it’s hard to find a period in which so much interest has been manifested in so many novel instruments. Let’s take a quick look at the leading manias of the moment.

We’ve written at length about bitcoin, an asset “mined” via a computer algorithm, which its promoters tout as an alternative to government-issued and -backed currencies. Yet as its plunge following Musk’s announcement suggests, bitcoin is entirely too volatile to function as a transactional instrument or as an investment.

An NFT, as explained by my colleague Sam Dean, is a digital “certificate of authenticity for an object, real or virtual.” The unique digital file is stored on a blockchain network in a way the prevents anyone from substituting a faked version.

Thanks to today’s frenzy for anything that seems new, some NFTs trade for many multiples of the value of the underlying object, which can be anything — a baseball card, say, or simply a video clip of an athletic accomplishment.

Some promoters deliberately create uniqueness in an NFT by destroying the underlying object. That’s what a performance artist calling himself Burnt Banksy did when he bought a print by the artist Banksy for $95,000 and, as a camera rolled, set it on fire. He then sold the photo as an NFT for $380,000, according to the New Yorker.

Then there are “meme stocks” exemplified by GameStop, a money-losing video- and computer-game retailer with 5,000 stores facing a bleak future as game-buying shifts from physical products to digital downloads.

Earlier this year, GameStop shares exploded in value as it became the lodestar for an army of small investors whipped into action by comments on the internet bulletin board Reddit. The idea was that the little guy could mark a victory over big investors who had been short-selling the stock — that is, betting on its continued decline.

GameStop shares, which had been trading for a few dollars each before the mania was launched, reached as high as $483 before falling back. It’s still trading at about $150, at which level investment professionals who work with traditional securities analysis believe it’s still ridiculously overvalued. Since short-sellers lose money when a stock rises, the action costs the shorts millions, driving some of them out of the trade.

“The markets go through cycles of mania, panic and crash,” says Frank Partnoy, a business and financial law expert at UC Berkeley law school and author of several books on investment fiascos of the past. “It feels like there’s a lot of mania in these markets now, and some of the reasons are consistent with other periods of history, but it’s complicated because it’s driven by investor psychology, so it’s hard to disentangle how much of it is legitimate versus illegitimate.”

Unwary investors have always been vulnerable to being sucked in by dubious investment promotions. The 1920s, for example, featured the original Ponzi scheme, through which Charles Ponzi lured clients by promising returns of 50% in 90 days, purportedly from trading in international postal reply coupons. Ultimately it was discovered that early investors were being paid from money staked by later clients.

Perils are heightened during periods of technological and social change. After the completion of the first transcontinental railroad in 1869, promoters exploited a mania for railroad investments by showering customers with stocks and bonds that had no detectable relationship to the value of the issuing lines.

In the 1880s, railroad tycoon Henry Villard discovered that if you didn’t tell investors how you were going to spend their money, you could whet their appetite.

Seeking to raise several millions of dollars in capital to take over a company but unwilling to reveal his target for fear of driving its price beyond his reach, Villard issued a prospectus for a “blind pool,” stating that he would reveal “the exact nature” of his plans 90 days hence. Investors flocked to his door, bidding for twice as much as he had originally sought to raise.

Villard’s scheme, however, was unique in its time. More recently, hundreds of so-called Special Purpose Acquisition Companies, or SPACs, have raised billions of dollars for blind pools, which promise only to merge with another company they hope to find sometime in the near future. Thus did Henry Villard’s discovery in the 19th century metastasize into a craze in the 21st.

Partnoy cautions that “in the rearview mirror, it’s always easy to say something was a fraud. But at the time, it’s difficult to tell a fraud from a legitimate, innovative new business or technology.” Early in the 20th century, he says, companies that became linchpins of the U.S. economy, such as General Electric, General Motors and RCA, were regarded in some quarters as scams.

It’s tempting to caution today’s investors against plunging into investments disconnected from fundamental or intrinsic values, the traditional investment standard. But the definition of intrinsic value has evolved over time.

Land has generally been viewed as the most solid investment one can make, but the housing crash that began in 2006 and provoked the Great Recession showed that bubbles can occur in any asset, causing mayhem when they’re popped.

Banks have often been regarded as gilt-edged investments, but recurrent banking crises, including those of the early 1930s and 2008, demonstrate that their potential to make imprudent, overleveraged bets can show their intrinsic values to be mythical.

Still, some features of today’s investment landscape are historically unusual, if not necessarily unique. One is a long period of easy money fostered by the Federal Reserve’s policy of keeping interest rates low. That makes investments not tied to interest rates relatively more valuable.

“This is the ultimate result of the Greenspan-Bernanke-Yellen ‘put,'” says Webber, referring to Fed Chairs Alan Greenspan, Ben Bernanke and Janet Yellen. “People have been trained that the Fed is going to have investors’ backs.”

The Fed hasn’t endorsed bitcoin or NFTs, but investors in the wilder corners of the markets may have the implicit belief that if the broad market went down the investors’ assets would fall too, and therefore Fed action would protect everyone.

Another feature is the disappearance of negative sentiment from the markets. “Many of the smartest investment professionals have just said they’re not touching shorting anymore,” Partnoy told me.

In part that’s because they’ve lost millions betting against a stock market that appears to be relentlessly bullish, and on individual companies that have traded well above values as judged by traditional standards — and have never, or not yet, come back to Earth. (Inflationary fears over the last few days have rattled some of the highest-flying stocks, but that may only be temporary.)

Add the prospect that small investors stirred by Reddit might gang up on you, and the reluctance of money managers to take a short bet becomes more understandable.

Finally, there’s the attraction of what appear to be big gains by investors who got in at the ground floor. At its current price, dogecoin, for all its absurdity, has gained 12,000% this year. This spurs FOMO — “fear of missing out.”

“It’s always a smart thing to be early into a momentum trade,” says Webber. “Everything trades on momentum and not on fundamentals, and if you’re early on a trade you’re going to win, and therefore people are encouraged to pile on. They think they’ll be smart enough to get out before they’re burned.”

Who is smart enough, however? Someone bought GameStop at $300, $400, or $483; those buyers have sustained massive losses based on its current price. Investors who bought bitcoin at $54,800 saw 16% of their stakes evaporate in the blink of an eye following a Musk tweet on Wednesday afternoon.

No one can say what will cleanse the markets of their current frenzies, when or even if that will happen, and which of today’s “loony” assets will stand the test of time.

For all that GameStop looks to be insanely overvalued at $150 a share, one can make a case that the company could remake itself into an avatar of the video-gaming market of the future and justify its current valuation. Far more implausible bets have come true in the past.

“Looking back at this period in a decade,” Partnoy says, “we’ll say there was a lot of mania, but we might be surprised at what turned out to be valuable, and what didn’t.”