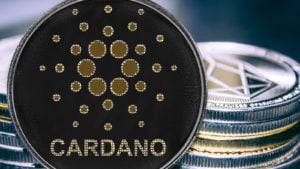 Cardano Has a Plan Where Most Crypto Projects Don’t

This story originally appeared on InvestorPlace

It is not news that Cardano’s (CCC:ADA-USD) network is growing. In mid-September, Cardano smart contracts launched on the company’s testnet.

Smart contract functionality fundamentally changes Cardano. It’s an important step forward for the firm, and it also launches Cardano into a new era.

Users will now be able to create dApps (decentralized applications) using Cardano’s platform. That only makes Cardano a more legitimate contender in its battle to challenge Ethereum’s (CCC:ETH-USD) dominance.

And while that is certainly relevant for anyone who might invest in Cardano, the Alonzo hard fork and smart contract upgrade is part of a bigger picture.

With the advent of smart contracts, Cardano has now entered the Goguen era. You’re likely asking, “What’s that?”

The Goguen era is one of five so-called eras that make up Cardano’s roadmap – its long-term guidelines for developmental milestones at the company and project.

Smart contract functionality is the hallmark of the third era at Cardano. The previous two – Byron and Shelly – were focused on building a foundation and decentralization.

I’ll get into what the Goguen era signifies, but before that I want to note how differentiated Cardano truly is from its competition.

Let me start by noting that most cryptocurrency projects are about as easy to understand as a novel computer language for a layperson like me. I assume that is true for most readers. Most are aware that something massive is occurring, and that there’s a generational opportunity afoot.

But it’s truly difficult to explain much of the broader context behind a crypto project than to note the idea of decentralization.

What I’d like to note is that by simply reading through Cardano’s roadmap and the five eras it denotes, investors will learn more about crypto than they will reading 100 articles about Dogecoin (CCC:DOGE-USD).

Cardano has systematically laid out a foundation of milestones to hit with its roadmap. My point is this: I haven’t seen anything close in crypto yet. Cardano represents clarity in an opaque world too often filled with meaningless jargon.

That isn’t worth nothing.

Joseph Goguen was a computer scientist who died in 2006. Cardano saw fit to name its smart contract era after him. He invented new fields of mathematical study, as well as OBJ programming language.

Naming history aside, why is the Goguen era important for Cardano? One of the most important reasons is that smart contract functionality is going to open up smart contracts to a wider base of developers.

One of the most important goals for Cardano smart contracts is that they will be so accessible that financial and business experts will be able to create them with no prior technical knowledge.

So, while Cardano has broad overarching ambitions to change the world, its business utility will move the needle a lot.

Ultimately, business utility is what should move the needle on Cardano prices most. Cardano’s roadmap lays out a plan for this in detail. Non-programmers are likely already building financial smart contracts on the Cardano network.

As they are released Cardano becomes more and more valuable. And it also becomes something much more tangible. Contrast that with many other cryptocurrency platforms and Cardano’s attraction should become more apparent. In a word, real world enterprise applications are one of the major hallmarks of the Goguen era at Cardano.

Another is that users should soon be able to create natively supported tokens using Cardano. That should remind readers of Cardano’s oft-cited competitor, Ethereum.

I see no reason not to believe in Cardano at this point. It doesn’t garner the attention that Shiba Inu (CCC:SHIB-USD) does, or that Dogecoin previously did.

That should comfort investors who want to invest in crypto that will be around in five years.

On the date of publication, Alex Sirois did not have (either directly or indirectly) any positions in the securities mentioned in this article. The opinions expressed in this article are those of the writer, subject to the InvestorPlace.com Publishing Guidelines.

The post Cardano Has a Plan Where Most Crypto Projects Don’t appeared first on InvestorPlace.