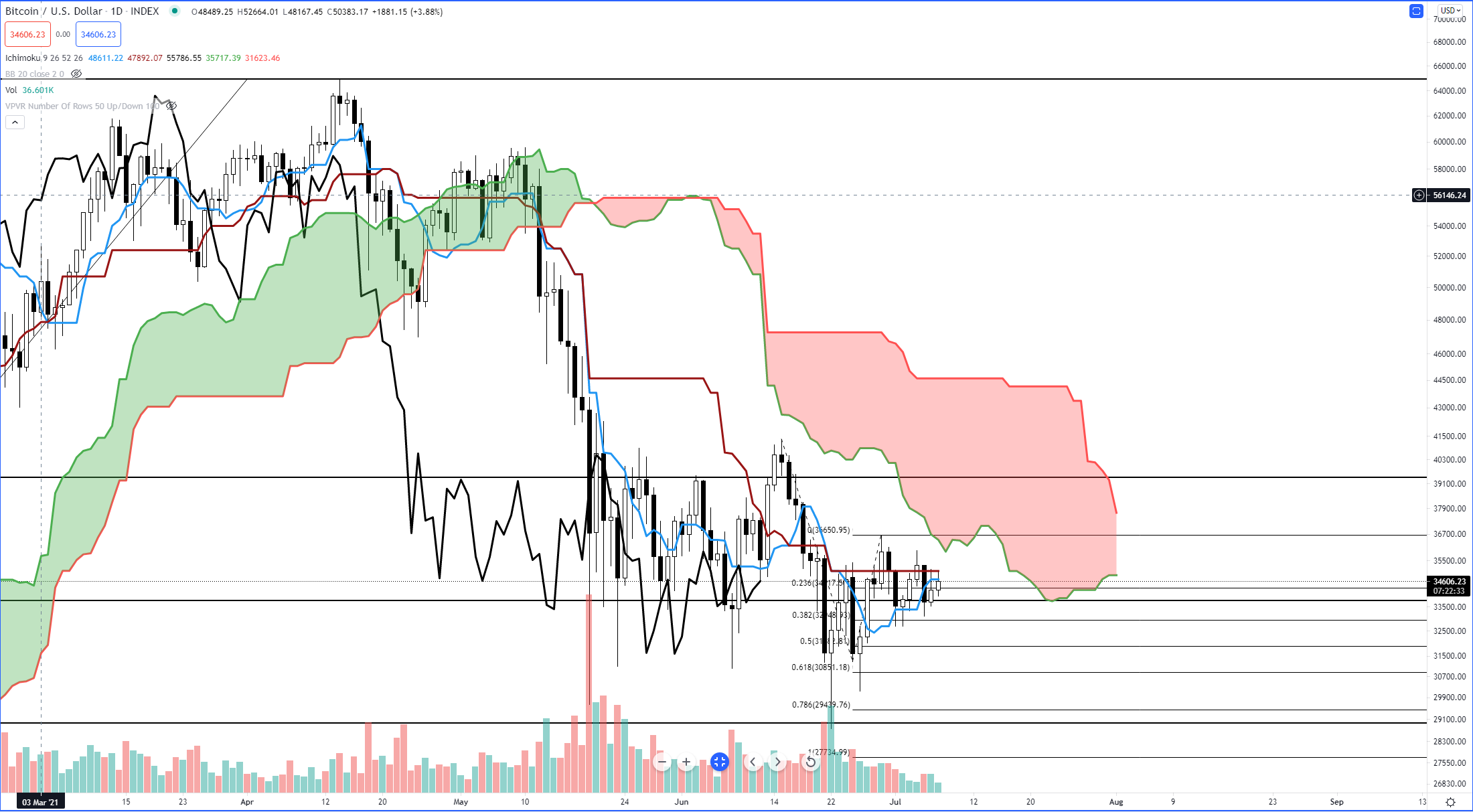 Bitcoin continues to find significant resistance on the daily chart against the Kijun-Sen in the Ichimoku system. The current Kijun-Sen shows one of significant strength: extended period of a flat price level. In otherwords, a long flat line. The Chikou Span also remains below the candlesticks. All other Ichimoku conditions show continued bearish momentum ahead – but bears might be in for a surprise. If the Bitcoin remains at this current range all the way into next Wednesday (July 14th, 2021), then it will be in a perfect positions to explode higher and put the Chikou Span above the candlesticks – may even above the Cloud itself. Ultimately, I remain bearish in the short term until traders can push Bitcoin back above the $40,000 value area. That would put the Chikou Span above the candlesticks, price above the 38.2 Fibonacci Retracement at $39,401 and the Tenkan-Sen would likely cross above both the Kijun-Sen and Senkou Span A. On the short side of the trade, I’m watching for any break below July 1sts low of $32,711 as a good entry to short. I continue to see Bitcoin testing the $24,000 – $27,000 value area in July. 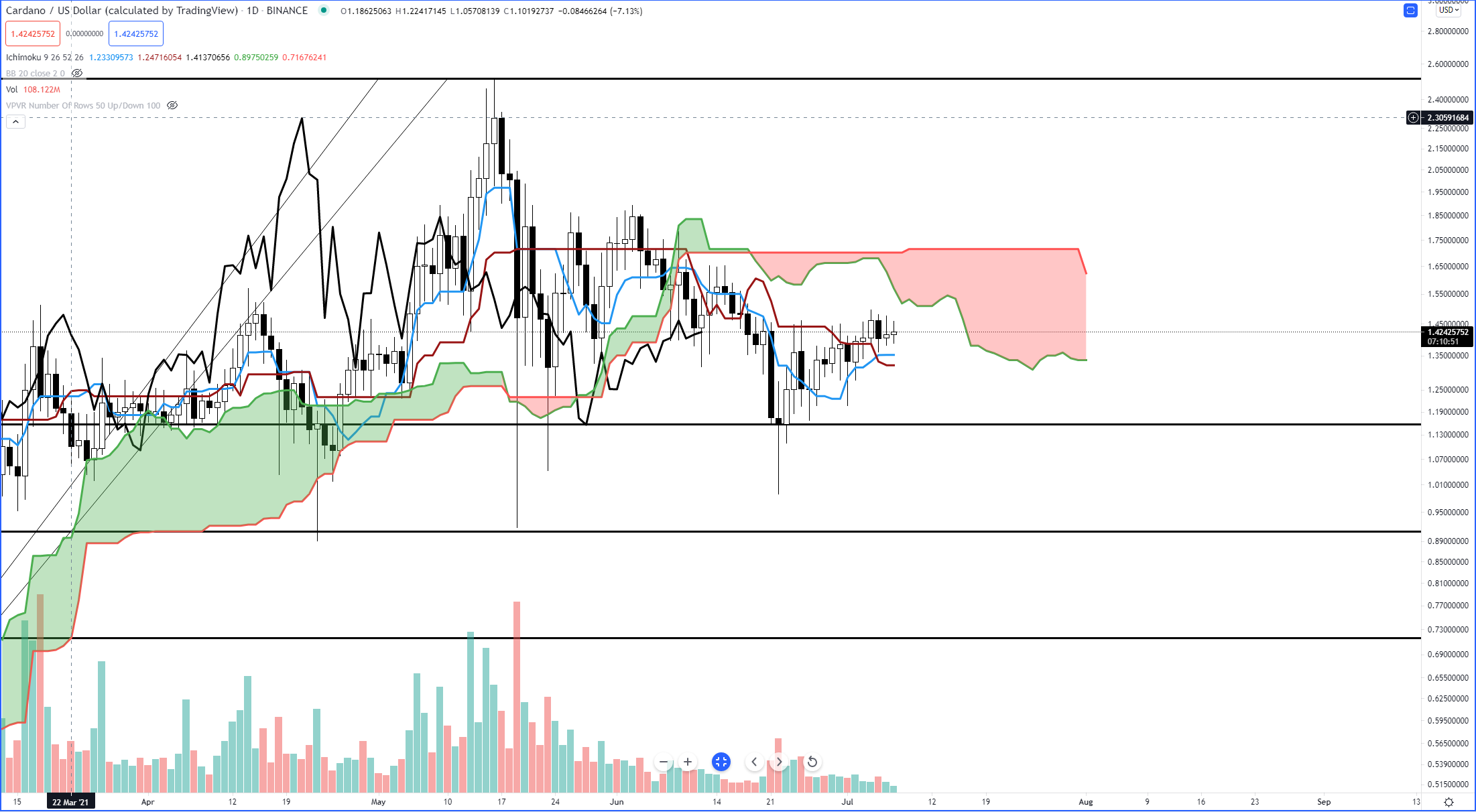 Cardano continues to trade higher and reach the peak of the bearish continuation pattern on its daily chart. Today (July 7th, 2021) is likely to be the seventh consecutive day where traders will see Cardano close above the daily Tenkan-Sen and Kijun-Sen levels. Trading above the Tenkan-Sen and Kijun-Sen is a bullish event – but there has been zero follow through by the bulls. Instead, volume has continued to drop across the board with little momentum pushing Cardano any higher. The near term sentiment remains bearish, given the location of Cardano within the Ichimoku system. But just like Bitcoin, Cardano is in a position to put some pain on the bears. If Cardano were to move and close above $1.58, then that would mean Cardano closed above the Tenkan-Sen, Kijun-Sen and Senkou Span A. Most important though, for the bulls, is that a close above $1.58 puts the Chikou Span above the candlesticks. But this would mean that Cardano is also inside the Cloud – a place where trading accounts go to die. The most significant and hardest level for Cardano to cross on the daily chart is Senkou Span B at $1.72. Within the Ichimoku system, Senkou Span B is the strongest support/resistance level and the strength of that support/resistance is exacerbated if it has a long, flat period of sitting at the same price level. With the exception of a small tick higher, Senkou Span B’s price level is the same starting all the way back in June 10th, 2021 – almost a month! Expect some significant resistance at $1.72 if Cardano does move back into that price range.

Save money on your currency transfers with TorFX, voted International Money Transfer Provider of the Year 2016 – 2020. Their goal is to connect clients with ultra competitive exchange rates and a uniquely dedicated service whether they choose to trade online or over the telephone.
Find out more here.