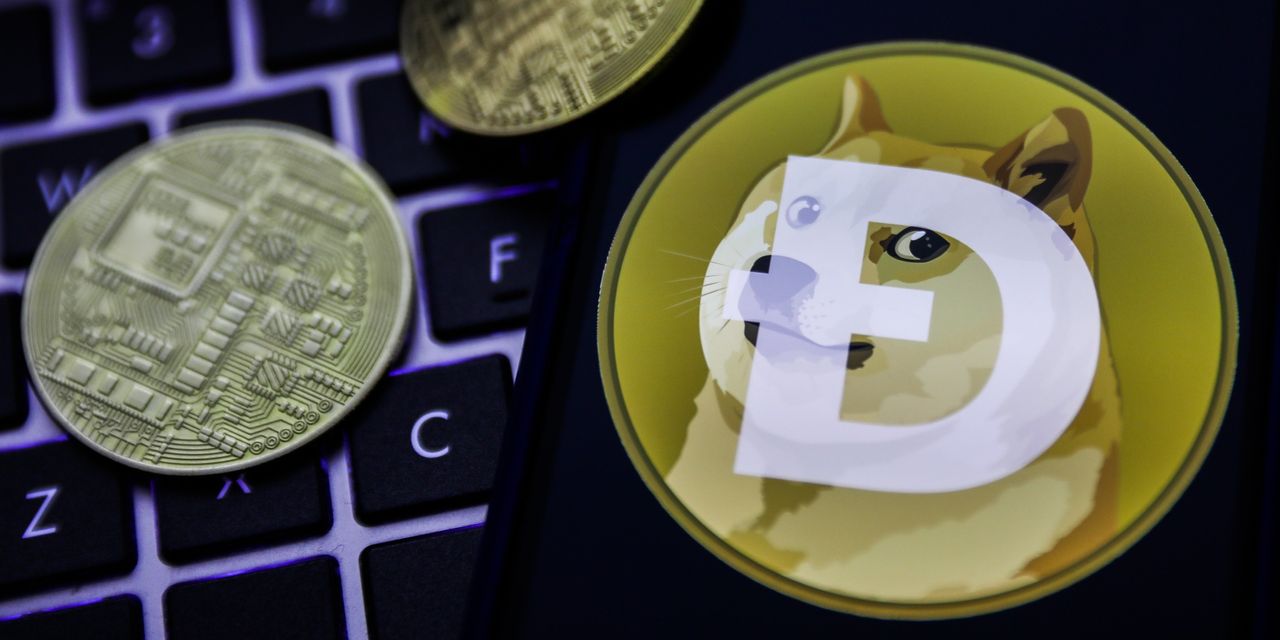 Dogecoin, Once a Joke, Moves Mainstream

A cryptocurrency that was created as a joke exploded into plain view on Wall Street on Monday, with a surge in dogecoin sending its 2021 return above 8,100%—more than double the gains on the S&P 500, including dividends, since 1988.

—is the latest act of financial alchemy by rapidly moving individual investors who have used access to no-fee trading platforms and a wave of government stimulus money to transform markets over the past year.

The cryptocurrency’s rise is reminiscent of

stunning advance earlier this year, an episode in which traders congregating on Reddit and other social-media platforms made a past-prime mall retailer into a stock-market superpower.

This time, dogecoin’s buyers have gone a step further, turning what was meant as a parody into a real asset, providing some traders who piled in early with unimaginable gains. The latest stage of the frenzy centers on Tuesday having been deemed “Doge Day” in online forums, a loosely organized bid to push the price of the cryptocurrency to $1, from a 5 p.m. ET closing price of nearly 39 cents on Monday and less than a penny in January.

Both episodes underscore the scale and potency of the current retail-trading environment, in which organized efforts in online communities can make a surprisingly large impact on market prices. They also reflect expectations that prices will continue rising, and as such they embody risks that these sudden fortunes will be wiped out when the winds of the markets shift.

“A lot of people coming in haven’t been around that long, and haven’t seen bitcoin crash,” said Robert Drach, an asset manager at Drach Advisors in Tallahassee, Fla. He oversees investments for individual clients.

For now, the rise and fall of favored assets in online forums has largely been contained. GameStop’s surge peaked in January and fizzled without hitting major indexes. That said, many investors are keeping an eye on these market oddities, reasoning that a precipitous fall in the price of dogecoin or bitcoin could prompt hedge funds and other large investors to reduce risky holdings and contribute to a broader retreat from risk.

Though there is no reason right now to worry that stocks are on the verge of a sharp pullback, dogecoin’s rise “feels to me like a bubble,” said Mr. Drach. “That’s always concerning to me, not just for dogecoin investors, but regular equities investors.”

For now, dogecoin’s sharp rise is vindicating one of the strange but true facts of 2021: The most unconventional trades can sometimes yield outsize gains. Someone who invested $10,000 in dogecoin on Dec. 31 would have amassed more than $821,000 as of Monday, according to data from Kraken. The same money invested in shares of GameStop would have yielded just under $87,250, and in an index fund tracking the S&P 500 nearly $11,150, including dividends.

Should dogecoin go on to hit $1, its value would exceed blue-chip companies including

“This is absurd,” said Billy Markus, the co-creator of dogecoin. “I haven’t seen anything like it. It’s one of those things that once it starts going up, it might keep going up.”

Dogecoin serves no purpose, and unlike bitcoin, faces no limit on the number of coins that can exist. Each day, computers solve mathematical puzzles to unlock new coins. About 129.2 billion dogecoin were in circulation Monday, according to CoinDesk.

Dogecoin’s rise comes alongside a broader rally in cryptocurrencies—and at a time when investor sentiment, even outside of cryptocurrencies, appears by some metrics to be stretched. The so-called everything rally in financial markets this year has also lifted the prices on a range of things from “meme stocks” like GameStop to nonfungible tokens that verify the authenticity of artworks and sports highlights.

Cryptocurrencies tend to be especially volatile, prone to double-digit percentage swings in a single day. The listing of exchange operator

sent prices of bitcoin and ether to records last week. On Sunday, bitcoin fell more than 10% on speculation that the Treasury Department was weighing taking action against some institutions over money laundering using cryptocurrencies.

Stimulus checks and low borrowing costs that have sent stocks soaring over the past year likely have contributed to the rise in dogecoin as well, Mr. Drach said.

“I don’t think you can sit there and be making a ton of money in your S&P 500 [exchange-traded fund] and then look at the dogecoin people and laugh, because it’s all the same liquidity pumping it up.” he said.

Slim Jim account. The snack-food brand, which frequently uses memes to draw attention online, said it planned to launch something called DogeSlimJim on Tuesday and exhorted the “DogeArmy” to spread the word. Its account was plastered with memes of the Shiba Inu dog that inspired the creation of dogecoin.

a spokeswoman for Conagra, said the brand planned to launch a doge-inspired digital product. She declined to provide further details and said Slim Jim’s campaign was unrelated to the value of dogecoin.

Shaun Becker, who lives in Phoenix, began promoting “Doge Day” on his Twitter account after seeing tweets from Slim Jim. The 36-year-old risk-and-compliance analyst said he first bought dogecoin on Feb. 8, as celebrities including

“I’m very confident that on Tuesday, it’s probably going to hit at least $1,” Mr. Becker said in an interview. “Even if you throw in $100, you can double your money. I don’t want anyone to make a risky investment. I just want everyone to get a piece of the pie.”

Newcomers piled into dogecoin to such a degree last week that investors on Robinhood Markets Inc.’s popular trading app had trouble executing trades.

Robinhood said that a surge in interest for the token last Thursday put “extreme pressure on crypto trading systems,” bringing down its order system for cryptocurrencies. Operations were back to normal within two hours, the company said, but traders encountered trouble again on Friday, the day that dogecoin notched an intraday record of 45 cents. That led to sporadic crypto order failures and delayed notifications for some customers, the company said.

Robinhood, as well as other popular retail trading platforms, have experienced outages and other technical glitches throughout the last year amid heightened investor demand. Robinhood also came under fire earlier this year when it halted and then limited customers’ purchases for a handful of stocks including GameStop that had suddenly soared in popularity.