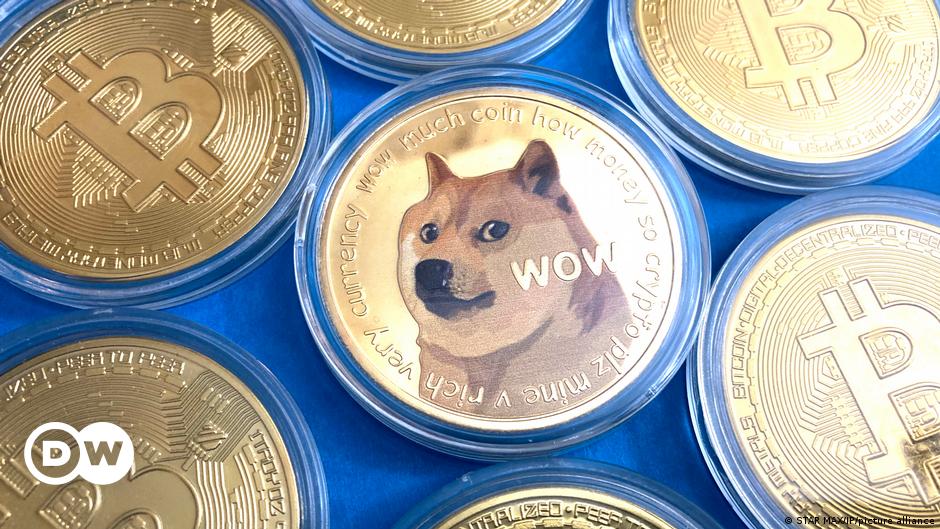 Dogecoin: The world′s most valuable joke | Business| Economy and finance news from a German perspective | DW

It needed one joke to send Dogecoin, one of the world’s most popular cryptocurrencies, crashing down 30%.

The cryptocurrency, which itself began as a social media joke eight years ago, lost more than a third of its price after Elon Musk called the digital currency a “hustle” during his appearance on the “Saturday Night Live” comedy sketch TV show.

The sharp fall was an anticlimax to a weekslong buildup by Dogecoin enthusiasts in the run-up to Musk’s appearance as a guest host on the popular show. Dogecoin’s price climbed to a record high before the airing of the show as fans organized watch parties in anticipation of a major boost for the meme cryptocurrency from the show featuring Musk, the most prominent Dogecoin supporter.

“Musk is probably happy to jump on the joke of what is a meme(coin), but investors are probably feeling real pain now,” said Justin d’Anethan, Hong Kong-based head of Exchange Sales at Diginex, a digital asset exchange.

“The supply is essentially unlimited [for Dogecoin], and so unsustainable long-term. It’s a question of who will sell first and who will be left holding the bags.”

Interest in cryptocurrencies has surged over the past year pushing the value of all digital coins past $2.3 trillion (€1.9 trillion), propped up by trillions of dollars in stimulus by governments and central banks and endorsement from some institutional investors.

While Bitcoin, the most valued cryptocurrency by some distance, has hogged much of the limelight witnessing record rallies, it’s the so-called altcoins such as Ether and Dogecoin that have taken charge in recent days.

There is no easy explanation behind the rising prices of Dogecoin, which was created as a parody on 2013’s cryptocurrency frenzy with the Shiba Inu dog breed as its logo. A deluge of cash thanks to government stimulus plans, speculation coupled with a fear of missing out, a dogged endorsement from Elon Musk, and some pure online fun thanks to social media’s fondness for the Doge meme are some reasons behind Dogecoin’s dream run that has seen the currency surge more than 20,000% in the past year.

“Dogecoin mania started with primarily retail traders who came from social media platforms. The retail trading community seemed convinced Dogecoin was going to 1 dollar and for many, fundamentals did not matter,” Edward Moya, senior market analyst at Oanda, told DW. “Celebrity endorsements from Elon Musk and Mark Cuban provided a justification for many early investors and drove the latest fervor.”

In a major boost to Dogecoin’s stardom, Musk’s commercial rocket firm SpaceX has accepted payment for a lunar satellite mission in the cryptocoin. The Dogecoin-funded mission slated for 2022 is called “DOGE-1 Mission to the Moon.”

Is Dogecoin the next Bitcoin?

Well, that’s been one of the most searched questions related to cryptocurrencies on Google over the past few months. Dogecoin and Bitcoin are two very different beasts, even if the former is based on the same software code that underpins Bitcoin.

Dogecoin can potentially have an infinite supply, which means those looking to remain invested in the coin for longer durations stand to see the value of their investment diminish over time. Bitcoin, on the other hand, has a fixed supply of 21 million units, which makes it scarce and in return more valuable much like gold and diamonds, which are also in limited supply.

While Dogecoin was designed to be a cryptocurrency for “sillies,” Bitcoin was always designed to be a decentralized digital currency, an alternative to central bank-controlled fiat money. Many die-hard cryptofans see Dogecoin and the speculative fervor around it as undermining their larger goal of taking cryptocurrencies like Bitcoin and Ether mainstream. They say the memecoin is just a speculative asset with few institutional investors backing it.

Even though Dogecoin has come a long way from its satirical origins to now being a popular peer-to-peer cryptocurrency, it’s nowhere close to threatening Bitcoin’s dominance. Its $70 billion valuation is just a fraction of Bitcoin’s $1 trillion.

Is Dogecoin a good investment?

It depends on who you ask. Dogecoin fans swear by it, touting it as a cryptocurrency of the future with Musk anointing it the “people’s crypto.” Its low transaction fees and large supply make it convenient for netizens to use the coin to tip online content creators like Redditors, bloggers and Youtubers. It’s easier to mine, which means transactions with Dogecoin can be processed faster than with Bitcoin.

Others see Dogecoin as a highly speculative and risky investment, much more than Bitcoin or Ether. Despite Musk’s support for the coin, none of his companies have publicly invested in Dogecoin as yet, unlike Bitcoin.

Even Musk has urged people to “invest with caution” and that it was unwise to invest one’s life savings in cryptocurrencies, which should be considered speculation for now.

“Dogecoin will unlikely become the preferred coin that is used by corporate America, but for now retail interest could keep Dogecoin supporting a similar fate as GameStop.  Dogecoin’s valuation is not justifiable but the retail support seems relentless and could keep its prices elevated well above a justifiable valuation,” Moya said.

With contribution from Reuters news agency