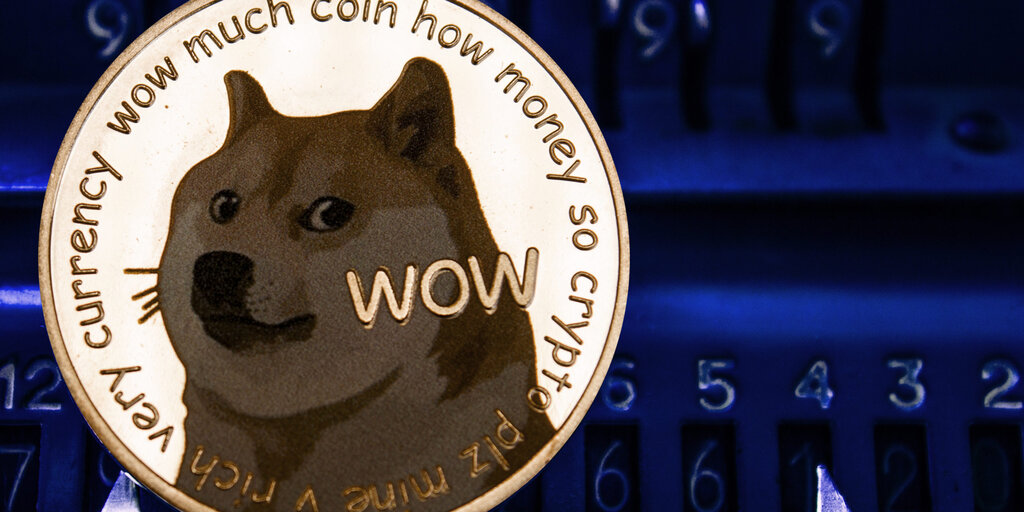 Dogecoin’s price has spiked to $0.35, an increase of 12% in the past 24 hours, as social media influencers continue to throw their support behind the Internet’s most valuable Shiba Inu dog.

Dogecoin, a cryptocurrency that was originally created as a joke, now has a market cap of almost $46 billion, making it the sixth-largest cryptocurrency. Its weekly jump of 24.5% makes it the second best-performing cryptocurrency. It’s just behind Bitcoin Cash, a Bitcoin hard fork, that recorded weekly gains of 24.8%.

Coinciding with today’s rise is a series of Dogecoin-endorsing tweets by WSB Chairman, an anonymous Twitter account with close to 1 million followers, including Elon Musk.

The user rose to immense popularity when it tweeted out on January 31, “Has Doge ever been to a dollar?” In a truly parabolic spirit, that simple tweet, once liked by Elon Musk, brought the account’s follower count from 12,000 to 750,000 in a week.

“I’ve been thinking a lot about Doge,” he tweeted this morning. “The community is so strong, there is no way this shit doesn’t become recognized as a legitimate cryptocurrency in the future.”

I’ve been thinking a lot about Doge… The community is so strong, there is no way this shit doesn’t become recognized as a legitimate cryptocurrency in the future. Name one other crypto that has united all types of people like Doge.

Back by popular demand

Mark Cuban, investor and NBA team owner, has also been vocal about Dogecoin’s potential. He said on April 12 that his team, the Dallas Mavericks, would keep 112,000 Doge (now $39,200) on its balance sheet.

Cuban told chat show host Ellen Degeneres earlier this week: “Although Dogecoin is not the best investment, it is preferable to invest in the asset than to play the lottery; it is also a way in which you can learn to use cryptocurrencies.”

The grizzled entrepreneur thinks the coin’s price has been hampered by withdrawal restrictions on commission-free trading app Robinhood. Robinhood, a popular way to buy Doge, doesn’t let customers transfer their Doge to a cryptocurrency exchange or spend it elsewhere.

This is common for large financial institutions, since it prevents them from getting in trouble with law enforcement over money laundering. PayPal does the same for its crypto sales. However, it means that such crypto can’t be, for instance, staked in decentralized finance smart contracts.

Robinhood said in March it would offer a crypto wallet “as fast as possible.” This, presumably, would let customers withdraw Dogecoin to their own cryptocurrency wallets.

In another show of celebrity support, Remy Munasifi, a YouTube comedian whose videos amass tens of millions of views, released on Thursday a Dogecoin-endorsing rap video for ReasonTV, a libertarian media outlet. “There are various indicators showing that the U.S. could be headed for a currency crisis,” ReasonTV’s caption said. “One of them has paws.”

All the hubbub has helped Dogecoin hit 1 million Twitter followers.

Sudden spikes and dumps have become the hallmarks of Dogecoin over the past couple of months.

Dogecoin’s first major price spike was in January when the so-called Dogecoin Army, the fans of the coin, coordinated efforts to pump the price in a similar fashion to the GameStop-style meme success from Reddit’s froum r/WallStreetBets. As they frantically bought Dogecoin, the coin’s price hit January 31 hit highs of $0.045, rising 66%. It quickly dipped down to $0.036 that day.

Another major, and this time even more successful, attempt, took place last month. On April 16, Dogecoin’s price jumped 225% to $0.42 after Elon Musk tweeted out a picture captioned, “Doge barking at the Moon.”

Much bark, very doge. But when moon?

The views and opinions expressed by the author are for informational purposes only and do not constitute financial, investment, or other advice.