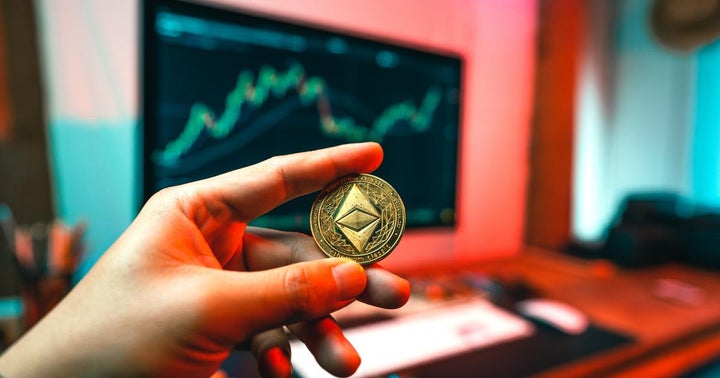 Bitcoin (CRYPTO: BTC) traded steadily under the $50,000 mark as the global cryptocurrency market cap increased 2.68% to $2.26 trillion at press time.

BORA, a token of the eponymous decentralized entertainment platform, was the top 24-hour gainer, as per CoinMarketCap data. It rose 22.83% to $1 in the period. Other notable 24 hour gainers were Elrond, Avalanche, and Stacks.

Why Is It Moving? On Thursday, the U.S. Federal Reserve said it will maintain a target rate range between zero and 0.25% and increase the pace of monthly asset tapering to $30 billion. The central bank’s decision comes at a time when inflation has been spiraling higher at a record pace. The Federal Reserve has projected three rate hikes for the coming year.

This event has shown that the actual impact of the event was already priced in.

An example of; ‘sell the rumor, buy the news’, where most of the people started debating selling prior to the event.

Result; heavy bounce back up, leaving late sellers behind.

Cryptocurrency investor Lark Davis said tapering fears are “overblown” and there was “nothing to fear, but fear itself” in a tweet on Thursday.

Omicron may actually end Covid.
Tapering fears are overblown.
US is not going to war with Russia.
There is nothing to fear, but fear itself. #bitcoin

Not all analysts are equally bullish on the Fed’s reduction in bond buying.

“The crypto sector is impacted by the Federal Reserve meeting because today they are expected to confirm whether they will taper their bond purchasing [program] and/or raise rates in order to combat inflation. If the Federal Reserve decide to do either of these things, that could negatively impact cryptocurrency as this could mean less money flowing into risk on assets, including crypto,” wrote Marcus Sotiriou, an analyst with United Kingdom-based digital asset broker GlobalBlock.

The counterbalance is the rising adoption of digital assets, as per Sotiriou. The analyst pointed to the largest association of banks in Germany considering offering cryptocurrency-related services to their customers.

“This would enable over 50 million people to buy crypto through their bank accounts – clients would not have to go through KYC (Know Your Customer) procedures as the banks already have that information,” wrote Sotiriou, in a note seen by Benzinga.

Meanwhile, Delphi Digital, an independent research boutique, said that near-term options are now skewed towards, which implies market participants are “buying protection” or are speculating the price will deteriorate further.

Read Next: Block, Formerly Square, To Let Users Give The Gift Of Bitcoin This Holiday Season