Here’s Why Bitcoin, Dogecoin, and Chainlink Sank This Week

It’s been another week of sell-offs for the broader cryptocurrency market. Bitcoin (CRYPTO: BTC), Dogecoin (CRYPTO: DOGE), and Chainlink‘s (CRYPTO: LINK) tokens fell roughly 10%, 17%, and 18%, respectively, over the previous seven days of trading as of 5:45 p.m. ET on Friday, according to data from S&P Global Market Intelligence.

In addition to concerns about cyclical pricing trends and regulatory risks, cryptocurrency prices appear to be getting dragged lower amid the ongoing China Evergrande Group debt default saga. Investors have generally been showing signs of becoming more cautious amid a mounting combination of risk factors, and it’s possible that the crypto space will see more significant sell-offs in the near future.

Fitch Ratings announced on Dec. 9 that China Evergrande Group had defaulted on $1.2 billion in bonds, and that it had responded by cutting the Chinese real estate giant’s rating to “restricted default.” China Evergrande’s default status might seem like an odd catalyst to drive prices for Bitcoin and other cryptocurrencies lower, but it makes sense in the context of investors seemingly becoming more risk averse lately.

China stands as the world’s second-largest economy, and investors are worried that financial issues in the country could have ripple effects on other markets. Cryptocurrencies don’t always post movements in line with trends for equities and assets, but broad movements out of risky investments can trigger big sell-offs for crypto tokens. With the market-leading cryptocurrency now down roughly 29% over the last month, this dynamic appears to be at least partially responsible for Bitcoin’s recent slide.

As a meme cryptocurrency, Dogecoin often trades in tandem with moves for the broader cryptocurrency market, so it’s not surprising to see its token also losing ground. The coin has previously posted explosive gains thanks to indications from Tesla CEO Elon Musk and other high-profile figures, but there haven’t been many positive, coin-specific pricing catalysts for the token lately.

While Bitcoin and Dogecoin merely function as currencies or speculative investment vehicles, Chainlink is backed by application features. The Chainlink network can provide services that make it possible to bridge outside data sources onto the blockchain.

Despite ending the week down double digits, Chainlink had some encouraging news for investors and posted significant gains in some recent daily sessions. Chainlink Labs announced on Dec. 7 that Eric Schmidt, the former CEO of Alphabet‘s Google division, had joined the company as a strategic advisor. Unfortunately, that still wasn’t enough to stop Chainlink’s token from posting substantial sell-offs over the last week.

With elevated volatility continuing to grip the broader cryptocurrency space as we move through the final days of the year, it looks like some investors are taking money off the table and banking profits. Media coverage and discussion among traders and analysts may be largely fixated on the recent pullback for token valuations, but the overall cryptocurrency space has generally enjoyed a year of incredible gains and momentum.

Bitcoin and Chainlink have each notched impressive returns across 2021, and Dogecoin’s performance has been even more eye-catching. 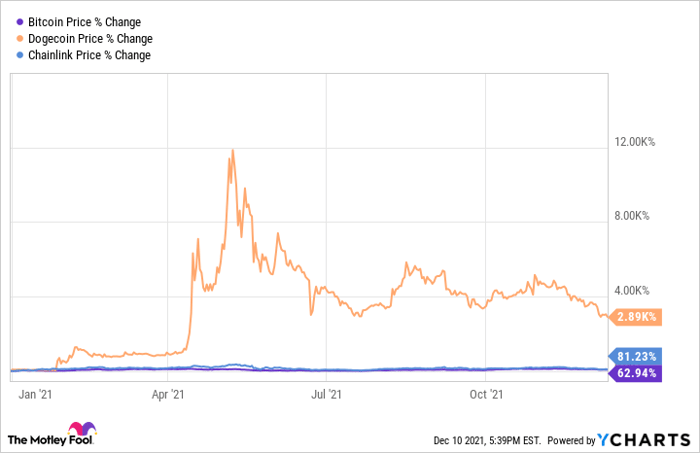 In the context of historical crypto pricing trends, recent crypto sell-offs don’t look terribly concerning. However, it is possible that the broader cryptocurrency space could be heading into a more prolonged bearish cycle. That means that investors have to be conscious of their personal risk tolerance, and it may be smart to make investments on a gradual basis rather than all at once in order to limit potential downside.

10 stocks we like better than Bitcoin
When our award-winning analyst team has a stock tip, it can pay to listen. After all, the newsletter they have run for over a decade, Motley Fool Stock Advisor, has tripled the market.*

They just revealed what they believe are the ten best stocks for investors to buy right now… and Bitcoin wasn’t one of them! That’s right — they think these 10 stocks are even better buys.