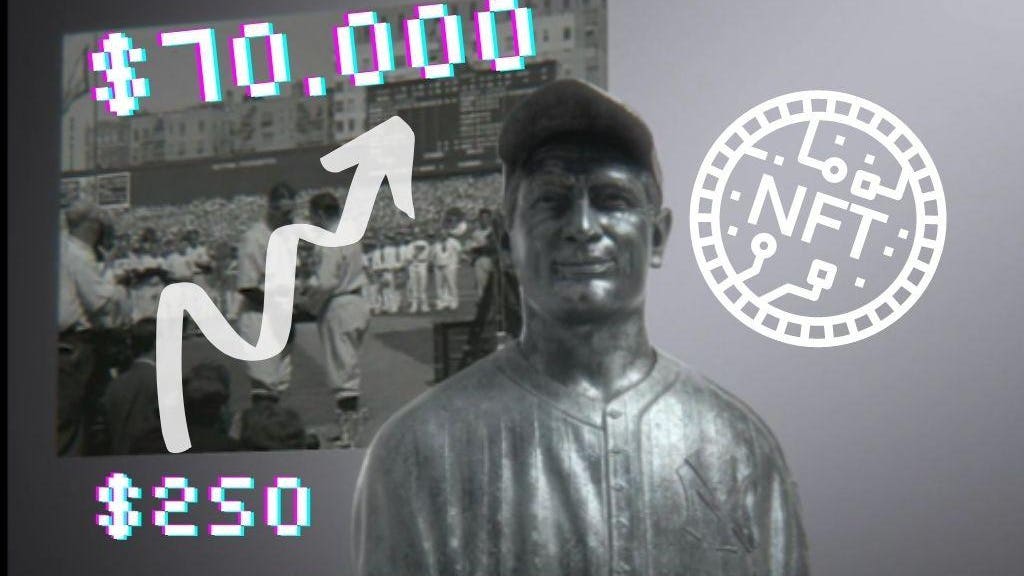 MLB Goes All In On NFTs With Lou Gehrig, Now LA Dodgers Art. Why Is This Still A Thing?

On July 4, the official online NFT auctioneer for Major League Baseball, called Candy Digital, sold a digital copy of a historic speech by baseball legend Lou Gehrig. The July 4, 1939 speech was Gehrig’s formal farewell from baseball after being diagnosed with ALS. It was the League’s first foray into the exciting world of non-fungible tokens, or NFTs. Opening bid was $250. Gemini cryptocurrency exchange co-founder Tyler Winklevoss hyped it on Twitter. Closing bid was around $70,400. Tyler Winklevoss bought it as a donation.

On Monday, NFT fans (and maybe Mookie Betts fans) can bet on a graphic of the LA Dodgers World Series 2020 ring, made by so-called metaverse artists RTFKT Studios in Los Angeles.

NFTs are digital art and audio clippings sold and traded on exchanges like Bitski in cryptocurrencies, usually, but not always, in Ethereum (ETH). They are part of a new asset, call them virtual assets.

If you are a sci-fi fan and have seen shows like Caprica, you can imagine owning virtual real estate, virtual night clubs, virtual clothes, virtual art for your virtual apartment. Nothing tangible. But in the make believe world of virtual reality and the internet, if the right name is attached to it, it can sell for tens of thousands of dollars. Why this is a thing I will never know, but I bought Enjin coin just in case.

“Yes, people play games in virtual worlds where they trade NFTs and some NFT real estate goes for tens of thousands of dollars,” says Adam Chaplin, CEO of DeFi for You in the U.K., a peer-to-peer lending platform where users can get loans in crypto while using NFTs, cryptocurrency assets, and physical assets as collateral.

I asked him about paying for make believe swords and armor for the crypto gamer geeks that Enjin is built around. Not only are they spending big money, they’re making big money, he tells me.

As a crypto investor myself, I hear about this NFT stuff and I feel like Indian Jones stepping into a pit of double stinger scorpions; thinking, what the hell is happening right now?

“The $500 sword…yeah, that is on the cheaper end of the spectrum,” he tells me. NFTs are crypto tokens backed by digital art or audio.

Investors in crypto who want to branch out beyond the top coins and even the decentralized finance coins are looking at NFTs as the latest gambling chip. Unlike roulette, where your odds of making money if you bet evens or odds is almost 50/50 (unless it lands on the two green squares), buying NFTs is like betting all your money on double-zero.

Unlike the alt-coin traders on Coinbase, and the Bitcoin “hodlers” (hold, spelled wrong. It’s a crypto typo that’s become a new word), NFT is also used for people who actually want to have a 10 second audio soundbyte of the first Beastie Boys recording. Or an original comic strip by Dilbert artist Scott Adams. Different exchanges sell different offerings, just like Nasdaq is where you buy Apple shares, and not on the NYSE.

“People are paying big money for NFTs because the value of said NFTs continues to increase. They’re hoping to make money on high-risk, high-reward digital assets. They’re also collectible, so some people might literally just be burning cash for the sake of having a collectible,” says Chaplin. “There are a lot of millionaires in crypto, and to put it bluntly, a lot of them are geeks who’ll spend money on a digital sword.”

For the true NFT believer, NFTs are about much more than just trading coins, or some random artwork.

“In the near future, I think NFTs will disrupt sales in real estate and other markets as well. Virtual goods are merely the first step on this path,” says Grigory Rybalchenko, CEO of EmiSwap (ESW), a cross-chain Automated Market Maker-Decentralized Exchange (DEX) supplemented by the ESW token. The Young DEX crossed $1.5 million in total value locked in a few days after their launchpad sales. Repeat: a few days. Second repeat: this is for make believe items in a make believe world.

Imagine Jim Cramer trying to wrap his head around this. Or your financial advisor at Ameriprise.

For investors, EmiSwap pays yield by staking, farming, and using utility NFTs for investors looking for the risky crypto equivalent of a dividend.

Crypto investors in the NFT space should probably focus on the main trends in gaming, sports and A-list creative industries, industry players tell me. It is as easy to guess whether an NFT is going to be worth a dime as it is to guess whether a the silver ball at the roulette wheel will land on …double zero.

Unlike traditional crypto, understanding the NFT collectible market trends are key to making money from buying NFT in the future. The other way is to invest in the NFT platforms, or just buy ETH.

For creators who want to sell an NFT, a photographer could tokenize their photos before releasing them, meaning they can show on the blockchain the time-stamp that it was released and thus discredit anyone who tries to steal their work, for example.

But the real sexy sector for NFT is real estate.

In February, a digital estate of nine adjacent Genesis plots of virtual land on blockchain marketplace and gaming platform Axie Infinity sold for the for 888.25 ETH, roughly $1.5 million at the time. Genesis plots are relatively rare blocks of land at the center of the Axie metaverse. Per its website, Axie Infinity is a Pokémon-inspired universe where anyone can earn the native Axie token (AXS) through gameplay. It is currently the number one Ethereum-based game by daily, weekly, and monthly active users, generating over 6,400 ETH in revenue (more than $2 million) so far, notes Wall Street intel firm McAlinden Research Partners.

Flying Falcon, the crypto-baron who bought it, said on his Twitter page: “We’re witnessing a historic moment; the rise of digital nations with their own systems of clearly delineated, irrevocable property rights. Axie land has entertainment value, social value, and economic value in the form of future resource flows.”

“Land and property can be fractionalized with NFTs so investors could buy part of a wind farm, manor house, New York apartment, or beach front villa and sell the NFT at a profit later – this opens the door for investors who can’t afford to invest in real estate, but who can now do so by buying a fraction of a property, represented by an NFT,” says Chaplin. DeFi For You is working to bring that to crypto investors.

Will we completely move to virtual reality with fake things, like a fake bust of Lou Gehrig, or an audio clipping from Elvis or some other A-list celebrity, probably lost on my laptop?

Will we own virtual real estate to sell to online companies?

Then again, don’t we already? Remember when buying website URLs was a business?

“We do,” says Rybalchenko. He remembers. “It’s already a part of our reality in some ways and will just keep growing in the coming years. Investors strike their best deals when they get in the space as early as possible. The earlier you are at the time of adoption, the higher your return on investment. Statistically speaking, the pioneers of any industry get the most returns.”

Everyone is trying their luck in this.

Crypto exchange Chatex is running their 99 NFT Robots Challenge now. You can win a Tesla S if you bid for their graphic art of robots – pink ones, camouflage ones, earthly ones. They position themselves as “an example of art for a new era, the metaverse, which can become a significant example of the formation of a new reality of our perception of creativity in the future,” says Leonid Bugaev, Chatex’s VP of Communications.

As part of the challenge, every day, for 99 days, one unique set of tokens from the constantly expanding “metaverse of Robots” are placed on the Rarible site. Each such set consists of a different number of copies – from 9 to 99, if anyone wants to buy them, for whatever the reason. Well, you can win a Tesla, so there is that.

“I would urge that people should also do their own research because the nature of investments is that they involve risk,” says Rybalchenko. “There is always a chance you will make bad investing decisions, especially in a yet unknown and emerging market. But that’s the learning curve,” he says. “You have to go through it to later make good investment decisions.”