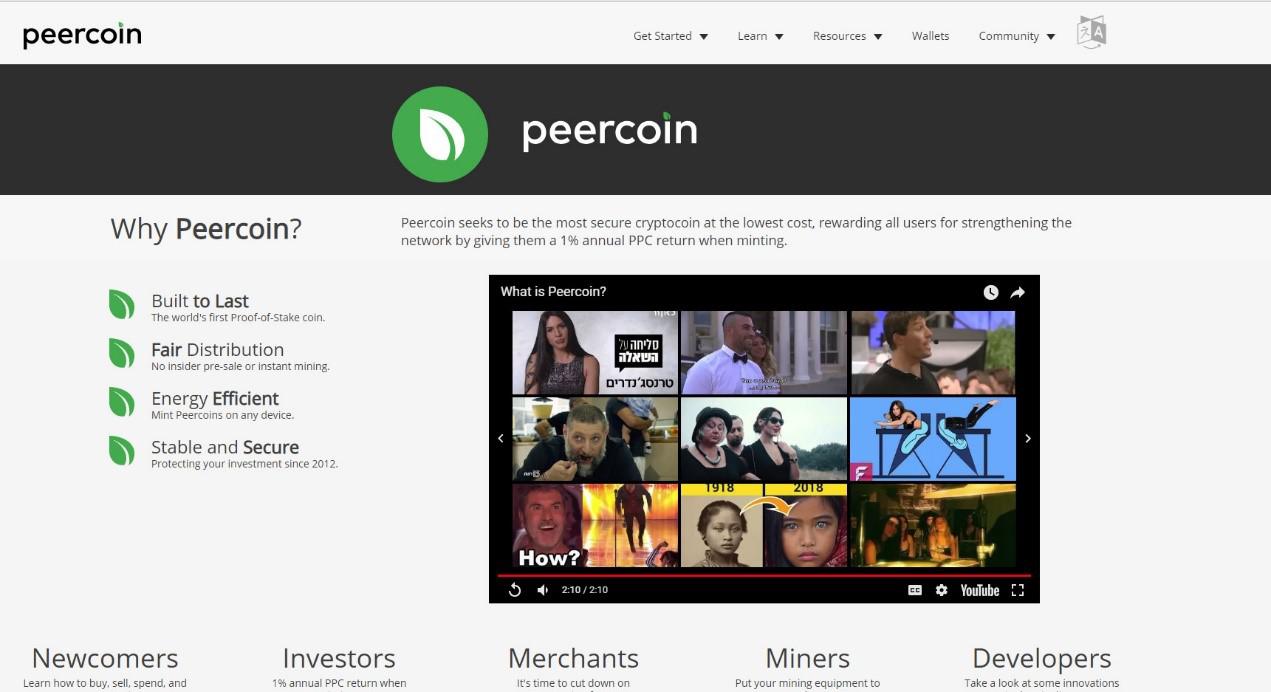 Peercoin is a cryptocurrency like Bitcoin and Litcoin that was created in 2012, making it one of the oldest and most reliable cryptocurrency networks in the space. Unlike Bitcoin’s Proof of Work (PoW) model, it is based on Proof of Stake (PoS), which does not rely on energy consumption. After Peercoin, many other cryptocurrencies were developed that relied on PoS or a combination of PoS and PoW.

Peercoin has a number of other distinguishing features in comparison with other cryptocurrencies:

Peercoin’s main contribution to the world of cryptocurrency is its Proof of Stake model, which is now widely adopted through the world of crypto. PoS is determined through coin age, which is the amount of currency multiplied by the holding period of the coins. For instance, users who receive 20 coins and hold it for 30 days have a coin age of 600 days. Coin ages can be consumed (received) or destroyed (given away). Coin ages are computed through a timestamp field in each transaction. Every transaction in a block contributes its consumed coin age to the score of the block. The block chain with the most consumed coin age becomes the main chain.

PoS, as opposed to PoW, allows every network participant to be both a miner or an owner. Blocks can only be created after coins have been held for more than 30 days. In these transactions, owners pay themselves, consuming their coin age and resetting. The first input is called a kernel and must meet specific hash target protocols. The hash target is a target calculated per unit coin age consumed in the kernel. The more coin age consumed in the kernel, the easier it is to meet to hash target protocol. For instance, if a user has a wallet-output that accumulated 200 coin-years and expects it to generate a kernel in 4 days, then a 400 coin-year wallet-output wold generate a kernel in 2 days.

How Blocks are Generated in PoS

Many cryptocurrencies rely on Proof of Work, or mining, to maintain their network or verify transactions.  Since miners need to compete fiercely for block rewards, sometimes pooling their resources to gain advantage over other miners, more and better hardware was created in response. These hardware solutions were in contrast to the idea of decentralization in cryptocurrencies.

Another downside of the Proof of Work system is that it relies on energy consumption, it is expensive, and these fees are carried by both inflations and transaction fees. As a result, it is not a viable system for those trading cryptocurrencies in countries with high energy costs. Peercoin, and the idea of Proof of Stake was a novel idea at the time that demonstrated that cryptocurrencies can function without relying on energy consumption. The idea was that is would create a secure peer-to-peer network where all computers could participate equally, saving huge amounts of energy and preventing centralization.

Peercoin is designed to be a steady coin with an inflation rate of 1% per year.

The idea was that allocating 1% in annual returns for compensation to users that work on maintaining the network would encourage users to store the currency, contributing to low inflation. In addition, the transaction fee of 0.01 PPC paid to the network is destroyed, another contributing factor. Technically speaking, the coin has a cap of 2 billion coins which are unlikely to be reached. If it were reached, however, the inflation rate could theoretically rise.

Checkpoints are aimed at protecting against attacks in the network’s early stages. They function as a safety switch in the case of a critical problem in the network. You can think of it as similar to System Restore in Windows. Checkpoints have come under fire since they function as a centralized broadcasting model. Although it was meant to be a temporary solution until a better one was found, they have now lost their important function they served in the past as networks today are stronger. Later versions of the protocol allow users to opt out of checkpointing. 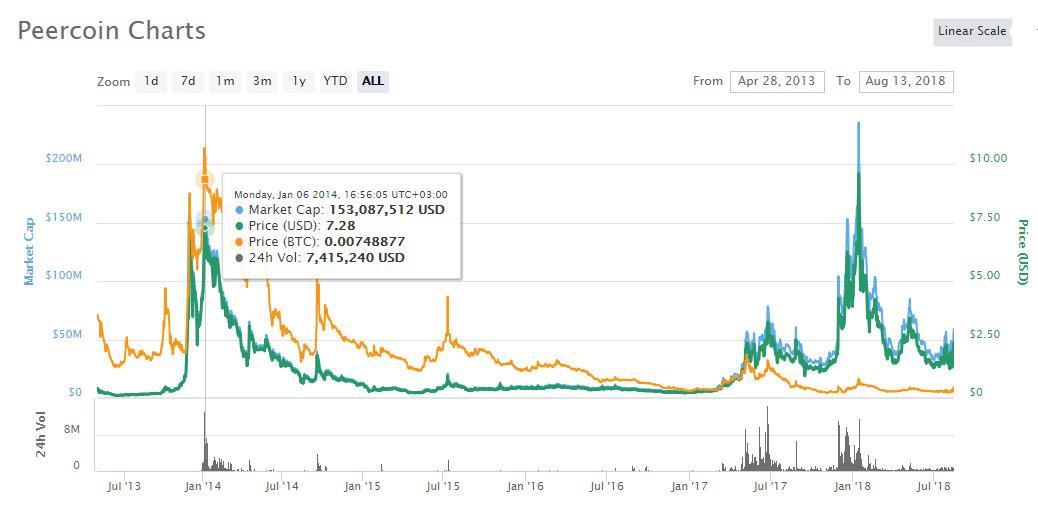 How to Purchase PPC

The main exchange for purchasing PPC is on WEX, which currently has one of the largest trading volumes of the currency at over $81K. PPC can be traded on WEX for BTC, and USD.

PPC is also available on the following exchanges:

How to Store PPC

PPC can be stored in the Peercoin wallet which can be downloaded from the official Peercoin website. The wallet is available for desktop in Windows and Linux version and mobile users (Android version). Other wallets also offer Peercoin support, such as the Coinomi wallet.

After downloading the Peercoin wallet, you can also create your own paper wallet for maximum security.

Peercoin is based on the same algorithm and code as bitcoin, the SHA-256 algorithm. This is a PoW scheme. When a small enough hash value is found, a block of transactions is added to the shared block chain. Mining is the process of discovering these hashes and creating new blocks. Peercoin does not favor this method of mining, especially with the advent of the ASIC miners. There are several Peercoin-dedicated mining pools to choose from, along with multicoin pools such as Coinotron, Give Me COINS, and Multipool.us.

Peercoin is the originator of the concept of minting, which is based on the Proof of Stake block generation that secures the network. Instead of requiring specialized hardware, it allows users to gain new coins based on the number of Peercoins they hold. When minting generates a new block, it contributes to the network. Peercoin gives users a reward for strengthening the network by giving them a 1% annual PPC return when minting. In order to receive this return of 1%, however, users must hold the coin for 30 days.

The Future of Peercoin

The Peercoin blockchain is self-sustainable and constantly updated, making it an excellent choice for future projects. Its smaller blockchain also allows wallets to sync faster, making it ideal for projects such as Peershares, an inexpensive and decentralized ledger used by businesses to track share ownership and the distribution of dividends in an automated fashion. Two additional projects currently in development are PeerAssets, and Indicum.

PeerAssets is a blockchain-agnostic protocol that can be used to create and exchange assets, aimed at being the easiest and most energy-conserving way to tokenenize any blockchain. Advantages include transaction-size efficiency, fixed transaction costs and small blockchain size, security (since it runs on the Peercoin blockchain) and low price of custom code execution.

Indicium is a decentralized autonomous company (DAC) based on PeerAssets. Its goal is to create and trade cryptocurrency indexes, similar to the index of a group of traditional stock prices of several companies. It does this with its Indicium token which gives users a stake in ownership and the right to receive dividends, vote on executive board elections and operations.