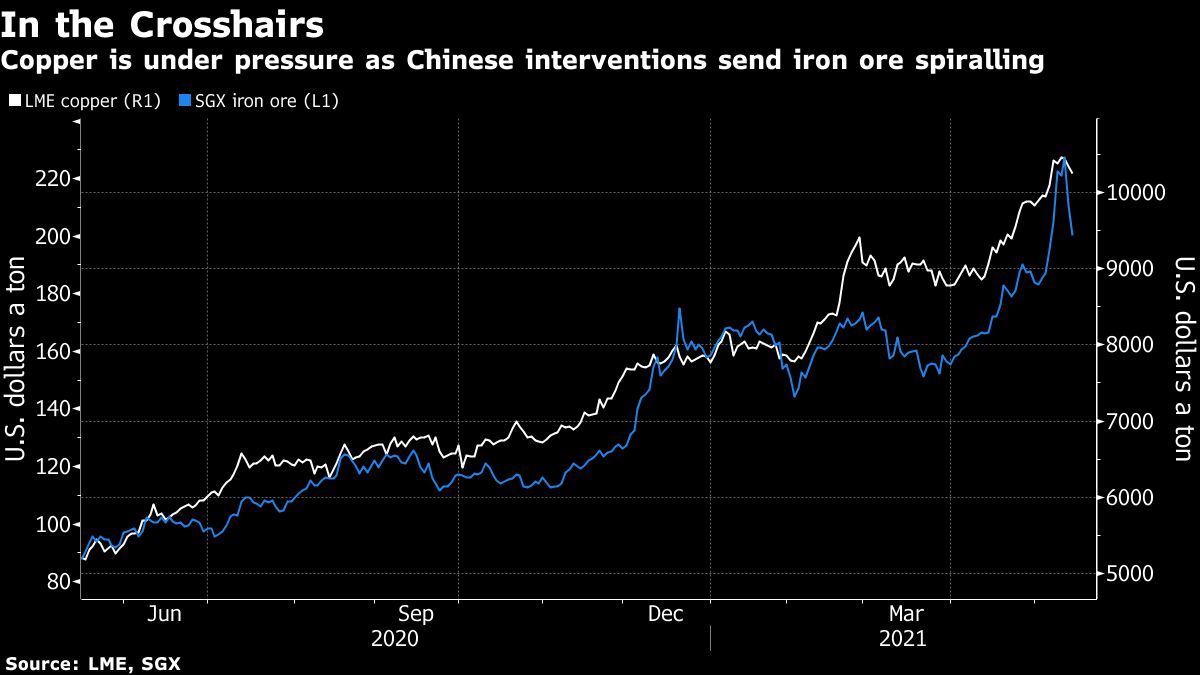 While today’s retail sales number will not see a rerun of last month’s blockbuster reading, economists expect continued strong consumer performance in April, with 1% growth from the previous month when the data is published at 8:30 a.m. Eastern Time. The update comes as investors are getting more sensitive to inflation risks following this week’s higher than expected print. Fed Vice Chairman Richard Clarida said rising inflation is a sign of “pent-up demand in the economy.”

One of the most obvious places the re-opening trades has played out is in commodity prices as demand for basic materials has surged. That trend seems to be starting to reverse, with iron ore prices in Singapore tumbling below $200 a ton overnight, after trading as high as $233 earlier this week. Other base metals including copper and aluminum also dropped. While crude is higher in this morning’s trading, it has not reversed all of yesterday’s slump.

There has been a lot going on in crypto this week, much of it driven by Elon Musk, who crashed Dogecoin at the weekend and knocked 15% off Bitcoin in midweek. A token called Internet Computer was launched and almost immediately was worth tens of billions of dollars. The joke about a joke coin called Shiba Inu soared and quickly faded. The Justice Department and Internal Revenue Service are investigating Binance Holdings Ltd. It’s all a bit breathless. Bitcoin is holding over $50,000 this morning.

The inflation-fears driven drop in global stocks is taking a breather this morning with most global gauges moving higher. Overnight the MSCI Asia Pacific Index climbed 1.2% while Japan’s Topix index closed with a 1.9% gain. In Europe the Stoxx 600 Index was 0.5% higher by 5:50 a.m., with miners the stand-out laggards. S&P 500 futures pointed to plenty of green at the open, the 10-year Treasury yield was at 1.639% and gold was higher.

The minutes from the most recent European Central Bank meeting are published at 7:30 a.m. As well as retail sales, U.S. import and export price data for April are published at 8:30 a.m. Industrial and manufacturing production for the month is at 9:15 a.m., with March business inventories and the latest University of Michigan Consumer Sentiment numbers at 10:00 a.m. The Baker Hughes rig count is at 1:00 p.m.

What we’ve been reading

Here’s what caught our eye over the last 24 hours.

And finally, here’s what Katie’s interested in this morning

A somewhat taboo phrase has started to creep into the market narrative. Inflation expectations are sky-high, and the data are starting to deliver. Meanwhile, ‘peak growth’ warnings are starting to ring, and have only grown louder after last week’s shockingly large U.S. payrolls miss. You guessed it: Stagflation.

Before you angrily close this newsletter, let me explain myself. Obviously stagflation is a loaded word: it evokes images of mile-long lines at gas stations in the 1970s, double-digit CPI and painfully high unemployment rates. Recently, the term’s been co-opted by the Republican Party to criticize the Biden’s administration’s multi-trillion dollar spending proposals.

This is not the 1970s, and it would be wrong to describe what’s happening in the economy right now as stagflationary, as Grant Thornton LLP’s chief economist Diane Swonk laid out in a masterful Twitter thread last week. But there are some interesting dynamics at play in the bond market that are worth examining.

Five-year breakeven rates jumped to the highest level since 2005 this week, while five-year real rates — which strip out the effects of inflation — sank to all-time lows. That gap between those two gauges has never been greater. Other measures tell a similar, if less dramatic story: The rate on the five-year, five-year forward swap contract is at the highest since 2017.

Much of the growing anxiety around inflation can be blamed on the severe and distinct choke points in global supply chains, with everything from semiconductor chips to corn in high demand. It feels like everything physical is on fire right now, and that’s a problem for companies contending with surging input costs — if you can’t build it, you can’t sell it. Which, in turn, is weighing on growth expectations.

Like Bloomberg’s Five Things? Subscribe for unlimited access to trusted, data-based journalism in 120 countries around the world and gain expert analysis from exclusive daily newsletters, The Bloomberg Open and The Bloomberg Close.