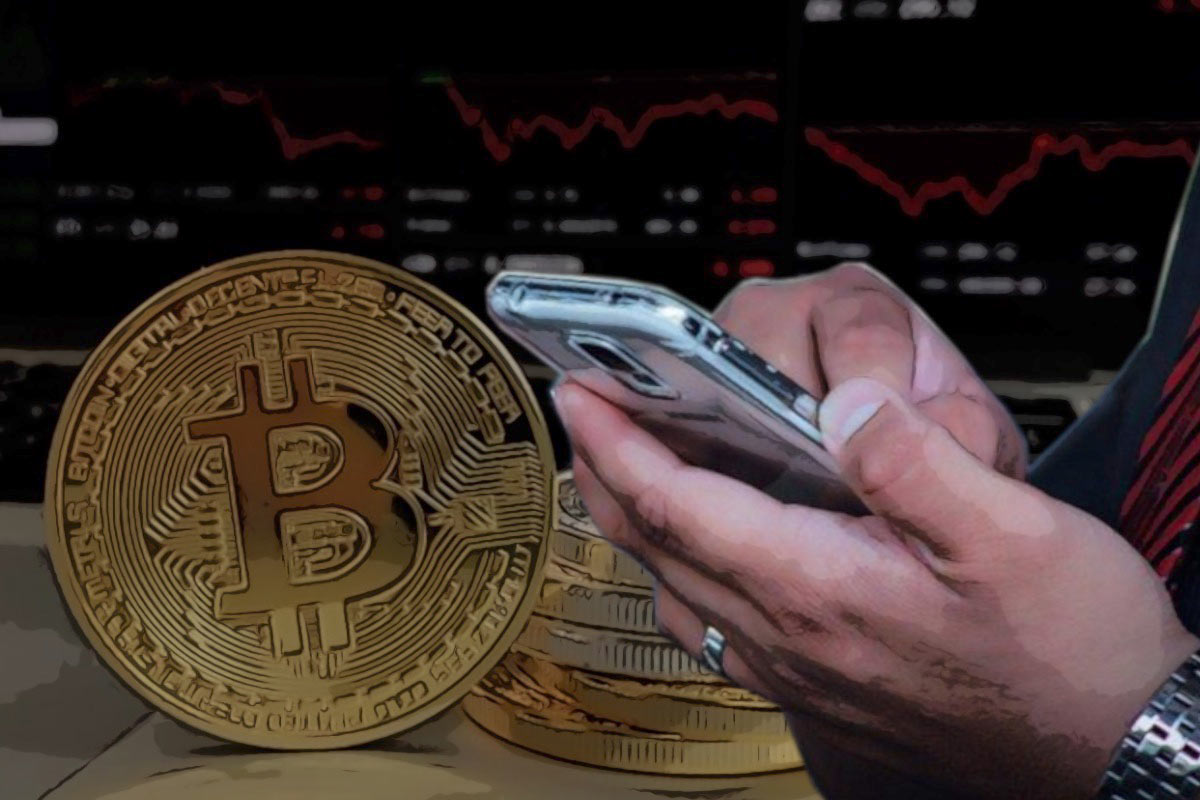 Most new traders in crypto markets, trade without understanding the blockchain technology the cryptocurrencies are based on and are often misled by tips and tricks sourced from communities on social media.

Ashwin Saraaf, a 30-year-old, from Gudgaon village in Madhya Pradesh was introduced to cryptocurrency trading during the COVID-19 imposed lockdown in 2020. “I was bored during the lockdown and saw advertisements about crypto trading apps and news reports about people entering crypto trading. So I tried it out,” says Ashwin, who works as an agent for ICICI prudential and is the father of a 2-year-old. “I initially invested Rs 2,000 and earned a profit of Rs 400 overnight. So I added another Rs 20,000 of my savings and it grew to Rs 30,000 within days,” he says. Cryptocurrency traders keep track of the price movements of cryptocurrencies, they use cryptocurrency trading apps to speculate if the price of a cryptocurrency will move up or down. The traders make a profit when they buy these digital currencies, also referred to as coins or tokens, at a low price and sell them at a higher price.

To decide which cryptocurrency to trade in, Ashwin relied on information from Telegram groups, YouTube and social media, often buying unheard of crypto coins based on advice from these sources. Following billionaire Elon Musk’s tweets about Dogecoin, a cryptocurrency based on memes, Ashwin invested Rs 1.2 lakh into it. “I went to sleep one night and the next day woke up to the news that the coin had crashed. I lost all of that money,” he says.

On May 8, Elon Musk appeared on the American comedy show, Saturday Night Live where he referred to Dogecoin, as a “hustle”. Dogecoin has lost most of its value since then, with the mass selling of the coin. The volatility among other cryptocurrencies began with Elon Musk tweeting about Tesla not accepting Bitcoins on May 13, this created panic among traders and more began selling. This was compounded by the May 18 reports about China prohibiting banks from providing its services for crypto trading and investing. In June, Ashwin lost another Rs 80,000 of his savings, suffering a total loss of Rs 2 lakh in cryptocurrency trading. But he brushes it off and says, “I have faith that I will recover from these losses, when the market goes up.”

Most of those in the country, who lost money in the crypto crash of 2021 are small-time crypto traders like Ashwin who find it easy to access trading apps on their mobile phones, but do not have access to the knowledge necessary to crypto trade. They dabble in this to make a quick buck in a short time, days or a few weeks at the most. A vast majority of these traders consist of college students, unemployed youth, people from low-income groups who entered the crypto market after the COVID-19 pandemic hit, hoping to make a quick buck, according to the blockchain experts TNM spoke to.

The traders often seek investment tips from WhatsApp, Telegram groups and YouTube channels, that encourage them to buy alternate cryptocurrencies, also referred to as altcoins. Altcoins are cryptocurrencies that emerged after Bitcoin’s success, these include Ethereum, Ripple, Dash, Dogecoin, Litecoin, among others. There are over 4,000 cryptocurrencies in existence.

In for the long haul

Nihal Armaan, a digital marketing consultant from Bengaluru calls himself a crypto investor. “I was aware of the crypto market in 2017 and started monitoring and actively reading up about the blockchain technology each cryptocurrency is based on. I started investing in January this year,” says the 30-year-old who invests 2% to 5% of his income as Systematic Investment Plans (SIPs) into cryptocurrencies. “Volatility actually scares me and that’s why I stay away from trading. I treat buying cryptocurrencies as a long term investment,” he says. He adds that anyone contemplating investing or trading in crypto needs to understand the fundamentals of cryptocurrency before entering the market.

“I advise everyone entering into the crypto market to actually do their own research thoroughly before considering investing any amount of money,” he adds. He suggests people read the white paper on the blockchain technology that cryptocurrency is based on and what real-world problems the technology intends to resolve. For example, the blockchain, Bitcoin is based on, resolves the issue of the reversibility of electronic payments. Ethereum is used for creating self-executing contacts, bypassing the need for third parties. Nihal says he lost 5% of his crypto investments in this year’s crash but is confident that he will turn a profit in the long term.

Kiran Kumar, founder of Pongfox, a manufacturer of table tennis robots, from Bengaluru, has been investing in cryptocurrencies since 2013 and also treats it as a long term investment plan. The techie has allocated 15 to 20% of his investment portfolio to cryptocurrencies. “I look at who is the founder of the blockchain project on which the cryptocurrency is based, the people who are backing the project, what real-world issues the blockchain project is attempting to resolve. Most of these blockchain projects are open-source on GitHub, so I check If they have any proof of concept or code,” he says. He goes on to add, “It’s also important to check how many people are following the project, are there enough developers working on the project. I also look at the number of wallets that support the project. These are important parameters to check before deciding to invest.”

Another investor, Kunal Rajan, a sound designer from Tamil Nadu who is based in Los Angeles, says he has allocated 100% of his investment portfolio in cryptocurrencies. “Banks don’t give the kind of returns that a crypto investment does,” says Kunal.

‘I found it on Google’

Shabari, from Tamil Nadu, is into crypto trading but did not do any prior research before he started trading on apps. His investment decisions are again based on tips shared over crypto communities on WhatsApp and Telegram, “I also make my decision based on search results in Google. I search the cryptocurrency I am trading in, on a website that does analysis,” says the trader, who has also lost money to the crypto crash but was not willing to share the extent of his loss. The 25-year-old spends most of his day tracking the crypto markets. “Each trader has their own strategy,” he adds.

Ashwin says it’s not practical for a person to keep track of the crypto market 24 hours. “Some days, I track the market for 8 hours. The news and tips come late. You go to sleep and wake up the next day to find that the coin values have crashed,” he says. He however intends to keep trading, “The interest rates from the banks are low, in crypto the returns are high, but so are the risks,” he adds.

Both Shabari and Ashwin used to trade in stock markets, using apps, for small amounts before entering crypto trading. Nihal and Kiran stayed away from crypto trading due to the volatility and the time required to monitor the ups and downs of the market.

Sharan Nair, Chief Business Officer for CoinSwitch Kuber, a crypto trading platform, says since its launch in June 2020, the app has managed to enrol over 70+ lakh users. He attributes the influx of new investors and traders to the rise of Bitcoin rates in 2020 and people staying at home due to the pandemic.

“Up to 70% of our user base are below the age of 30. We are seeing a lot of people joining from tier II and tier III cities. And also a steady increase in senior citizens investing in crypto, though not big in number, which was surprising for us,” says Sharan, who adds that a large chunk of those who trade in crypto are youngsters in their first job or still in college. “We see a lot of college students who are investing a part of their pocket money into crypto. They are very quick buyers and sellers often booking quick profits. Among the salaried, we don’t see much buying and selling, but you see them investing steadily month on month when the prices go up or is stable and doubling down on their investments when the prices go down. Senior citizens invest in a SIP format for the long term,” he adds.

Sharan notes that the new traders also include people from low-income groups, such as security guards, taxi drivers and even homemakers, who hear about crypto trading through advertisements on social media. “Unfortunately, what happens with this group is that they are the ones trying to make money quickly. They join trading because they don’t want to miss out. They see people make money when a cryptocurrency price rallies and want to join in, but lose out due to a lack of proper decision-making skills,” he says.  He points out that people who treat crypto currency as an asset class typically have access to a lot of information. “Those who only want to make a quick buck by trading don’t educate themselves and many don’t have access to information about the blockchain technology they are investing in. These people are more susceptible to get entrapped in pyramid schemes and scams,” he says, and adds that new entrants to the market were particularly affected in the recent crypto market crash.

Be wary of Whales

When Elon Musk pumped up the price of Dogecoin by tweeting about it a lot of people bought into the currency. The announcement by Elon that Bitcoins would be accepted as payment for Tesla cars pushed up its prices, which later crashed after he backed out of accepting Bitcoins. Elon cited environmental pollution from cryptocurrency mining as the reason for this reversal. Those in the crypto currency ecosystem call this tactic a classic “pump and dump” and altcoins are more susceptible to this kind of price manipulation.

Sandeep Sahoo, Director at Savethem Indian foundation and a freelance Blockchain Developer working with cryptocurrencies warns new Indian crypto traders and investors about ‘Whales’– these are Individuals who hold large amounts of altcoins, making them powerful enough to manipulate its valuation. “There are communities that can manipulate any crypto market. These are people who entered the market when the prices of the cryptocurrency were low, accumulated a lot of the cryptocurrency and hoarded it. They then promote it by asking others to buy-in,” says Sandeep. People then enter the market as the prices rally but what they don’t realise is that the market is already 50% up and they are buying the coins at higher rates. “When the prices are finally high, the whales then dump the crypto coins they hoard in the market. The price crashes and traders lose money. There are influencers on YouTube, Instagram channels, Discord, Telegram and WhatsApp groups that do just this,” he adds. Most new traders buy altcoins due to their relatively lower buying cost and chances of better returns if their prices go up.

Sandeep says that cryptocurrencies such as Bitcoin, Ethereum and other top chart coins will gradually recover by December 2021, but the altcoins holders, who were into short term profit will have to wait for the first quarter of 2022, for any hopes of recovery. “The crypto crash is a loss only for those who are into quick trading and looking to earn quick money, long term investors will recover. I am saying this based on technical analysis. That’s how it works, this is how the algorithms are designed,” he says.

Early investors in the crypto market urge new entrants to educate themselves before entering crypto markets and not treat it like the stock market.