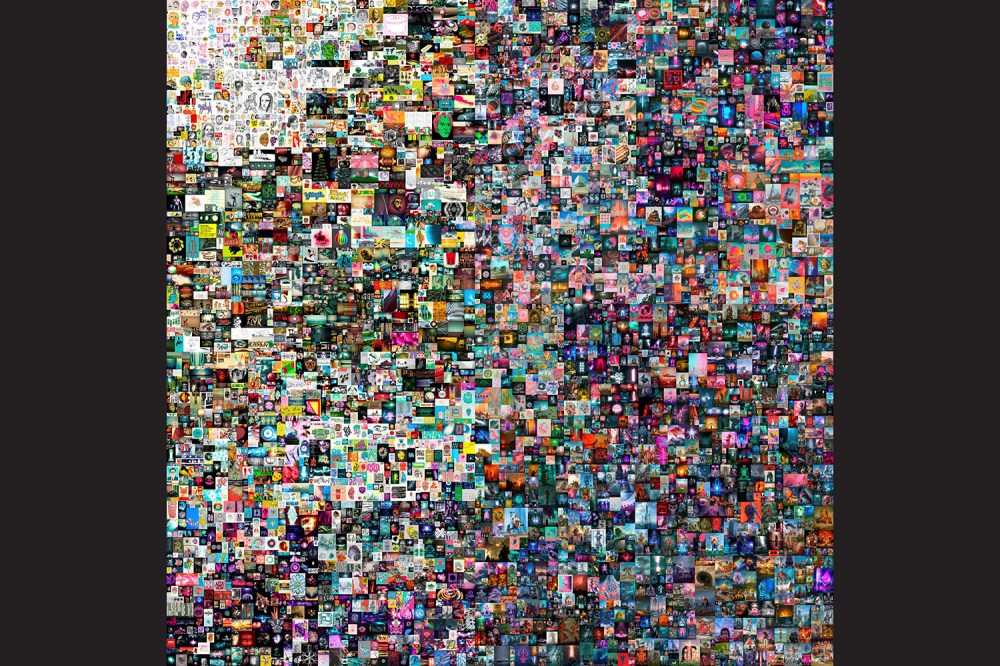 The digital artist Mike Winkelmann, professionally known as Beeple, just sold an NFT—a “non-fungible token,” an asset on a cryptocurrency blockchain—of his image Everydays: the First 5000 Days at auction by Christie’s for $69,346,250. This is the third most expensive auction sale ever of a work by a living artist.

That brought plenty of publicity—both to Beeple and to NFTs themselves. But high art is a strange world, one that for decades has run on hype, pumping prices, the convenience of transferring large sums of money through nominal purchases across borders, and an increasing detachment from any physical reality. That makes it a natural match for the world of blockchain.

Most crypto-assets, such as bitcoins, are “fungible”—you don’t care which particular bitcoins you have, only how much bitcoin you have in total. Non-fungible tokens are individually unique and can be used as an identifier for an individual object. An NFT is just a pointer, containing a website address, or maybe just a number. An index entry, scribbled in inedible ink—and dependent on you not physically losing it.

The Christie’s conditions of sale are 33 pages of small print, but they eventually admit that you are not buying any copyright or other rights—not even reproduction rights—to the digital image. You are buying only the NFT itself: a crypto-asset containing a pointer to a copy of the digital image file.

In other words, you buy a certificate of authenticity, but not the work authenticated by it—just the bragging rights to it. NFTs are a new version of the “I Am Rich” app from 2008: an early iPhone app that cost $999.99 and did nothing but show that you could afford to spend a thousand dollars.

Alex Rotter of Christie’s said of the Beeple sale: “We let the market decide what it’s worth, we didn’t push anyone to bid $60.25 million. People want Beeple, and the market decided.” But the words “people,” “market,” and “worth” are all questionable in that sentence.

The buyer, known by the pseudonym Metakovan, is linked to an NFT “index fund” called Metapurse. This fund offers “B.20” crypto-tokens, which are shares in Metapurse’s portfolio of NFTs—including existing works of Beeple’s art. Beeple himself has a 2 percent stake in the B.20. Cryptocurrency entrepreneur Vignesh Sundaresan admitted to being Metakovan on Thursday, after previous denials.

The ostensibly multimillion-dollar NFT was bought using ether (the currency of the Ethereum blockchain), not dollars. Cryptocurrency works by creating new forms of digital magic beans, then convincing suckers that the magic beans aren’t worthless. You can synthesize a headline-friendly number like $69 million much more easily with magic beans than with actual money, especially when you own the beans.

None of this is new to the world of high art, which pulls all the same tricks that have become depressingly familiar from crypto—but backed by rather more real money. Damien Hirst’s jeweled skull sculpture For the Love of God was sold in 2007 for $100 million—according to Hirst, in any case. He said it was bought by an anonymous consortium. He later admitted that he was a member of the consortium.

The COVID-19 pandemic has devastated the art market, having halted live auctions, art fairs, and gallery exhibitions; overall sales slid 22 percent in 2020, and public auction sales dropped 30 percent, according to the Art Basel and UBS Global Art Market Report. It’s no wonder that Christie’s wanted in on NFTs.

Like cryptocurrency, the high-end art market is notorious for money laundering. A work that supposedly trades on aesthetic value can be used to move large sums, often without even moving the work itself from its climate-controlled storage unit in the Geneva Free Port or other tax-free havens. Physical tokens of arbitrary value, including artworks by Claude Monet, Jean-Michel Basquiat, and Andy Warhol, were one of the ways that millions of dollars were moved in the Malaysian 1MDB bribery scandal.

If the world can be convinced that NFTs have value, then crypto-tokens can serve the same money-moving function as physical art—without even the expense of storage. Never mind that this value is mostly in hyping your own work or avoiding the onerous eye of the taxman.

The headline goals aren’t new. The first noteworthy NFT was the CryptoKitties game, created in late 2017 at the height of the previous bitcoin bubble, which allowed the trade and sale of cartoon cats. The tokens were exchanged furiously among bored crypto-traders, with breathless headlines speaking of $140,000 cat pictures. Of course, the tokens hadn’t been sold for dollars at all, but for ether supposedly of that value—though you couldn’t sell $140,000 of cryptocurrency in one lot for actual money without seriously depressing the price.

NFTs chiefly exist to convince you to give your money to a crypto-promoter. When the promoter has your money, the NFT has done its job, and there may or may not be anything at the address the NFT points to. The role of the small artist is to see headline numbers, hope for a win in the artistic lottery, and buy cryptocurrency to pay for “minting” NFTs—an Ethereum transaction fee was around $40 in February. The artist then needs to hope a bored crypto-holder will buy their NFT.

There’s some interest in NFTs as officially endorsed collectibles themselves, in the same way as baseball cards are. NFT promoters have tried to sell tokens of popular intellectual properties for a few years, but NBA Top Shot, launched in October 2020, is the main one that has achieved any success. NBA Top Shot lets fans buy and trade video snippets of highlights from National Basketball Association games.

The Top Shot site is mostly a trading platform, where buyers and sellers hope to strike it rich—assuming they don’t have issues with withdrawal delays, as its creator Dapper Labs tries to handle a site that often deals in cryptocurrency trades across borders without violating anti-money-laundering laws.

The most controversial factor in NFTs is the appalling carbon dioxide production of the underlying Ethereum blockchain. Many artists heard there was money in NFTs, announced plans, then recoiled at the backlash from fans outraged at the ecological irresponsibility of cryptocurrency.

Like Bitcoin, Ethereum uses proof-of-work mining: a process of competing to waste electricity to win a lottery to get fresh coins. A simple life cycle analysis shows each Ethereum transaction accounting for around 60 kilowatt hours. Assuming 30 percent renewables and 70 percent fossil fuel generation, this creates 28.7 kilograms of carbon dioxide. Ethereum says it plans to move off proof-of-work, though this has supposedly been six months away since 2014. Almost nobody does NFTs on the non-proof-of-work blockchains.

The artists’ objections may not matter. Many artists are discovering that NFTs are being made of their works, without their permission, and certainly not with compensation. This is, on the face of it, fraudulent—it’s passing off a work as representing a creator it absolutely doesn’t represent. But people can do it, so they do.

This is a variant of the “registration scam”—where a promoter will offer to name a star after you or sell you a square foot of land on the moon. The website Global Art Museum has been making NFTs of public domain artworks, using the names of the museums holding the works, and claiming the museums will get 10 percent of the take; museums such as the Rijksmuseum in Amsterdam have had to publicly clarify that they have nothing to do with this. (Global Art Museum says the whole thing was a prank.)

But the collusion of high art, NFTs, and conspicuous consumption may make artists keener to get on the bandwagon, even if it’s short-lived. Twitter founder and bitcoin holder Jack Dorsey has offered an NFT of his first tweet, currently at a bid of $2.5 million; the keenest bidder has been Justin Sun, the founder of the Tron blockchain and a cryptocurrency holder. For Beeple, the $9 million Christie’s fee on the sale of Everydays has paid off in marketing—the price of the B.20 tokens that he owns 2 percent of went up from $1.75 to around $22 at its peak.

After seeing the Beeple sale, Hirst announced that he too would be getting into NFTs.