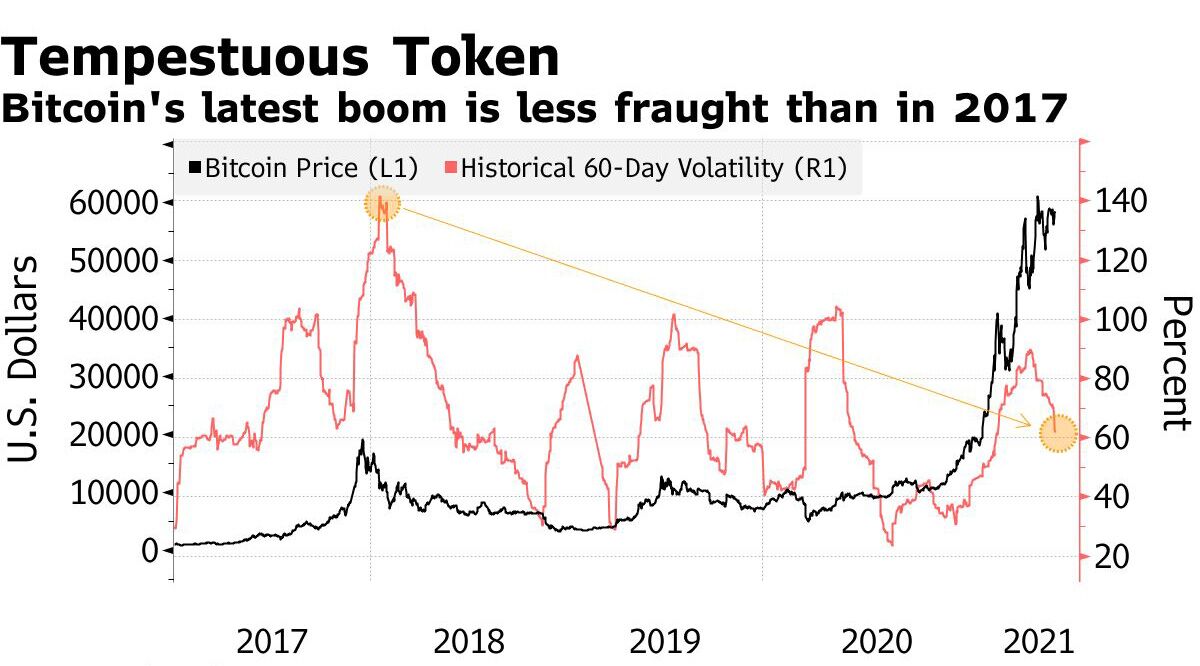 Bitcoin neared an all-time high on Monday after a record run for stocks and ahead of a listing by the largest U.S. cryptocurrency exchange.

The token rose as much as 2.6% to $61,229, the highest in nearly a month but still short of the March 13 peak of $61,742. Bitcoin is up almost ninefold in the past year, a return that towers above that of more familiar assets like equities or bullion.

Against the backdrop of Wall Street’s growing embrace of cryptocurrencies, the direct listing of digital-token exchange Coinbase Global Inc. is also stoking interest. Coinbase is due to go public on the Nasdaq on April 14, the first listing of its kind for a major cryptocurrency company and a test of investor appetite for other start-ups in the sector.

“Coinbase listing on the Nasdaq is as bullish a signal as possible at this current stage,” Antoni Trenchev, co-founder of crypto lender Nexo, said in an email Friday.

A growing list of companies are looking at or even investing in Bitcoin, drawn by client demand, price momentum and arguments that it can hedge risks such as faster inflation. Tesla Inc. earlier this year disclosed a $1.5 billion investment in Bitcoin and more recently started accepting it as payment for electric cars.

Elsewhere, Goldman Sachs Group Inc. has said it’s close to offering investment vehicles for Bitcoin and other digital assets to private wealth clients. Morgan Stanley plans to give rich clients access to three funds that will enable crypto ownership. The deck of exchange-traded funds tracking the token is expanding. Paypal Inc. and Visa Inc. have begun using cryptocurrencies as part of the payments process.

JPMorgan Chase & Co. strategists wrote in a recent report that a pullback in Bitcoin’s volatility could stoke institutional interest. On a rolling 60-day basis, the swings in the token are generally smaller now than when it peaked in 2017, though far above other assets like gold.

Other cryptocurrencies, such as second-ranked Ether, have also been climbing. The overall value of more than 6,600 coins tracked by CoinGecko recently surpassed $2 trillion.