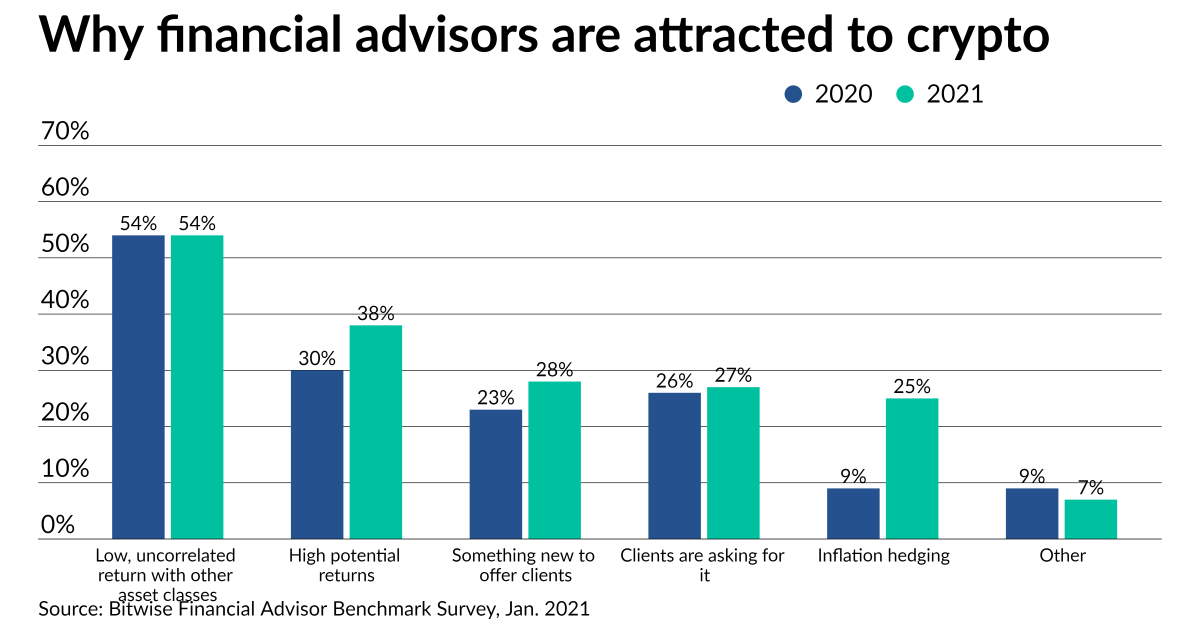 When financial advisor Ross Gerber decided he would start helping clients invest in cryptocurrency last year, he knew it wasn’t going to be easy.

There were the hacking attempts he’d faced on his own Bitcoin wallet and the lack of SEC guidance — not to mention there were few companies to help him make it happen. But he didn’t want to wait.

“This is the future,” says Gerber, CEO of a $1.8 billion RIA in Santa Monica, California, which will roll out digital currency in client portfolios later this month. “It’s not going to take over our business, but it’s going to be a part of it.”

A small, but increasing number of advisors like Gerber want to incorporate digital assets into their practices — 9.4% of advisors are allocating part of client portfolios to crypto in 2021, up from 6.3% last year — according to a Bitwise survey.

Problem is, there’s hardly any infrastructure to help financial planners give advice on digital assets, rather than just invest in a crypto product.

What’s available?
Fidelity is the only traditional RIA custodian currently offering Bitcoin custody to advisory firms, via Fidelity Digital Assets, but its services are intended for institutional investors, not advisory clients. Account minimums are set at $100,000.

There are entrants emerging into the marketplace, such as Reality Shares’ crypto tech startup, Onramp Invest, which is building its first product rendition for FAs and recently secured a $500,000 round of funding. Custodians including Apex Clearing are building solutions for advisors to manage digital assets, and Schwab may be looking into white-label options for a crypto brokerage, according to a report by The Block, although Schwab declined to comment and it’s unclear whether it would impact its RIA custody clients.

Gerber’s 24-advisor RIA, Gerber Kawasaki Wealth and Investment Management, will be adding Bitcoin to the portfolios of clients who request it through Gemini, the crypto exchange and custodian started by the Winklevoss twins, which allows financial advisors to manage customizable master-sub accounts.

A Gemini spokesperson did not respond to requests for comment.

But the solution isn’t perfect, according to Gerber, who is cautious to entrust assets to an institution that hasn’t been around for many years. He took out an expensive insurance plan in case of loss.

“We’re just super focused on how we protect our clients against all these potential risks,” he says.

There’s a lot of room to improve the advisor experience, according to Tyrone Ross Jr., CEO of Onramp Invest. His firm is building a solution to connect an advisor’s workflow to crypto-qualified custodians, so they are able to model, plan, rebalance and bill on Bitcoin the same way they would with Apple.

“The account opening process — it’s really bad,” Ross says. “And the ability to do it in size and scale, and the documentation or recordkeeping — all of those things are just not there.”

A case for crypto
While there aren’t many options for financial advisors, executives at crypto companies say there’s plenty of demand.

Fidelity Digital Assets, which launched in 2018, now has approximately 100 clients, according to Terrence Dempsey, head of product at the unit. That includes hedge funds, family offices, RIAs and broker-dealers, he says.

While Dempsey wouldn’t comment on how many financial advisors or RIAs made up Fidelity’s client count in this division, he said the broader company is starting to see a “large trend” of demand for crypto.

“The majority are financial advisors [who] manage a portfolio and want to be able to buy and sell on the client’s behalf,” Dempsey says. For others, they want to bring crypto onto their investment platforms, so they can see and manage what their clients are already holding.

Onramp Invest has a waitlist of firms collectively managing approximately $300 billion in assets, according to Ross, who is in the process of raising his seed round of funding, which he anticipates will be between $3-5 million.

Challenge ahead
Technology and options aside, major hurdles stand in the way of wide adoption in terms of regulation, security and cost.

There has been little formal guidance on crypto issued by the SEC. The regulator’s incoming chairman, Gary Gensler, a digital token professor, has expressed concern over fraud and manipulation.

Gerber himself, who has his own Bitcoin wallet, has experienced attempted hacks. “Decentralized systems are a nightmare when you have problems,” he says.

The SEC recently issued a risk alert regarding investment advisors and digital currencies and published initial guidelines on crypto custody at the end of last year.

“There’s a lot of clarity here that needs to happen,” Ross says.

Gerber has spent much time and money trying to get it right: He hired a cryptocurrency attorney and is working with a designated compliance officer to streamline a process of documentation, recordkeeping and security.

Hard work aside, he’s preparing for an influx of requests.

If the inquiries he’s already received from clients are any indication, “we think the demand is going to be off the charts,” Gerber says.