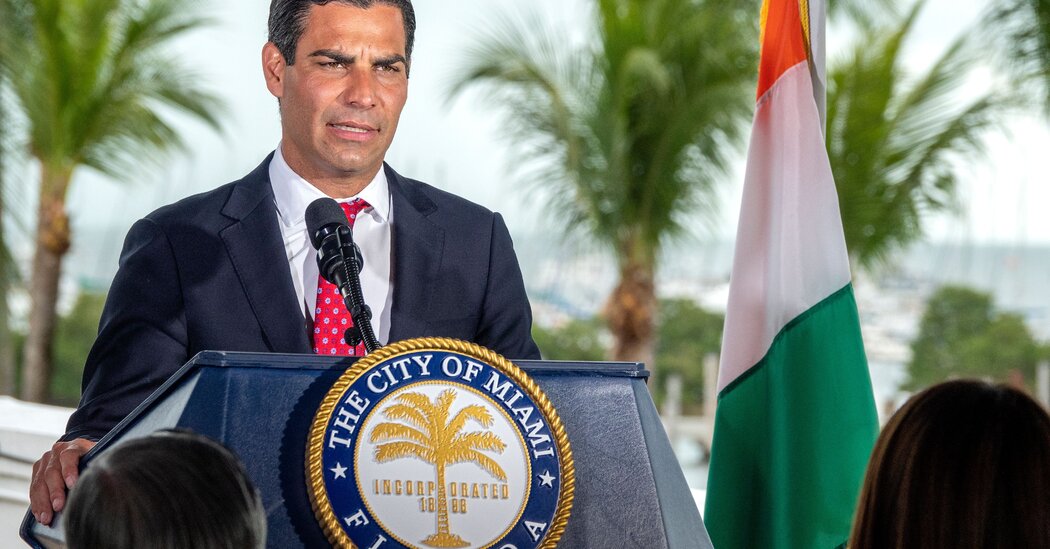 Miami’s Mayor Wants to Make His City a Crypto Hub

Mayor Francis Suarez of Miami is selling his city as the world’s cryptocurrency capital. “We want to be on the next wave of innovation,” he told DealBook. To make that happen, Mr. Suarez said he was “refashioning” the city’s “fun in the sun” image. Thanks in part to the mayor’s marketing efforts, tech and finance titans have flocked to Miami during the pandemic.

Visions of Bitcoin City. Last month, the Republican mayor suggested Miami pay municipal workers and accept tax payments in Bitcoin, as well as invest city funds in the cryptocurrency. Local officials have agreed to study the proposals. The notion made him popular in the crypto community, advancing his rebranding campaign. His efforts have also won him campaign donations from tech investors, attracted money to cultivate Miami’s burgeoning tech sector and may soon pay a big county bill.

The cryptocurrency exchange FTX is seeking naming rights for the city’s N.B.A. arena, currently known as AmericanAirlines Arena. Miami-Dade County took over branding deals in 2018 and is supposed to pay the team $2 million per year, sponsor or no (American’s contract ended in 2019). The FTX agreement is nearly final, pending a Friday vote by county commissioners. “It’s awesome that we’ve attracted a huge cryptocurrency exchange,” Mr. Suarez said, noting that FTX’s bid “complements the brand” that Miami is establishing.

The tech center exodus and crypto boom converge in Miami. The pandemic prompted people to relocate to Florida from Silicon Valley and New York as Bitcoin gained legitimacy and value. The mayor sees the trends as interrelated, and he is seizing the moment. “People come here and start realizing that there’s way more tech talent than they thought,” he said.

Not so fast, AstraZeneca. American officials said early today that the company may have included “outdated information” from a U.S. clinical trial of its Covid-19 vaccine, providing “an incomplete view” of data that could cast doubt on promising news.

President Biden’s next big spending plan begins to take shape. Economic advisers are assembling a $3 trillion package, beginning with a huge infrastructure proposal. It will go beyond roads and bridges to also address climate change and racial and gender equity.

Microsoft will ease workers back to the office starting next week. The 57,000 employees who left the tech giant’s Redmond, Wash., headquarters because of the pandemic can choose to work from the office, home or both.

BlackRock investigates allegations of employee misconduct. The money-management giant hired a law firm after employees said that they had faced harassment and discrimination over their sex, race and religion. A senior executive, Mark Wiedman, apologized for making inappropriate comments at work events.

Though she lost the Democratic presidential primary, Senator Elizabeth Warren is exerting considerable sway over President Biden’s financial policies, judging by the number of people from her orbit who have been picked to join the administration. But her influence is increasingly being tested, The Times’s Alan Rappeport writes.

Ms. Warren has seeded the administration with former staffers, in line with her oft-professed belief that “personnel is policy.” They include Adewale Adeyemo, who’s up for deputy Treasury secretary, and Rohit Chopra, the nominee to lead the Consumer Financial Protection Bureau. Bharat Ramamurti is already serving as deputy director of the National Economic Council.

She is continuing to roll out ambitious progressive economic proposals, including an “ultra-millionaire tax” and a “real corporate profits tax” that would raise rates on the wealthy and on big businesses. “People like progressive ideas and want to see them enacted,” she told Alan. “Washington is beginning to catch up.”

But she hasn’t won every time. Mr. Biden has rejected an expansive cancellation of student debt, an idea she championed, and appears unconvinced about her wealth tax idea. Treasury Secretary Janet Yellen has also expressed skepticism about the wealth tax, and recently hired Natasha Sarin — whose work with Larry Summers has raised eyebrows within Team Warren — as an economic policy adviser.

“It’s more a speculative asset that’s essentially a substitute for gold, rather than for the dollar.”

— Federal Reserve chair Jay Powell on Bitcoin and other cryptocurrencies.

The state of Georgia is caught in the middle of an intellectual property dispute between two South Korean manufacturers of batteries for electric vehicles. The International Trade Commission recently ruled in favor of LG Chem in a trade secrets case against SK Innovation, issuing a default judgment based on a problematic absence of documentation. SK says its partially built factory in Georgia is threatened by the decision.

The case could “seriously undermine critical progress on the climate crisis,” Sally Yates, former U.S. deputy attorney general, told DealBook. She argues that it’s in the public interest to reverse the I.T.C.’s decision. The commission’s only penalty is exclusion — an order barring infringing products from the U.S. market, although SK can fulfill existing obligations to Ford and VW. (Another recent dispute between Korean firms resulted in a ban on imports of a Botox competitor.) But a federal court could order SK to submit to monitoring and impose damages, if warranted, “without killing jobs and setting back the Georgia economy,” Ms. Yates said.

“The Georgia plant will not sit idle,” countered LG’s lawyer, David Callahan of Latham & Watkins. LG’s attorneys say SK exaggerates the order’s impact on American manufacturing and minimizes its I.P. violations. SK can “redesign” or settle, they suggested, but in any case “the demand for these batteries ensures that another manufacturer will step in” if it abandons the plant. (The Botox dispute was ultimately settled.)

The Biden administration can veto the I.T.C. by early April. Gov. Brian Kemp of Georgia has urged the president to do so, citing a 2013 reversal of a ruling in a dispute between Apple and Samsung. (The administration did not respond to a request for comment). Gov. Mike DeWine of Ohio — where LG is constructing a battery plant with General Motors — has asked the president to uphold the ruling, saying that “stolen intellectual property” shouldn’t be used to compete with his state’s workers. Mr. Biden is visiting Ohio today.

Best of the rest

We’d like your feedback! Please email thoughts and suggestions to dealbook@nytimes.com.