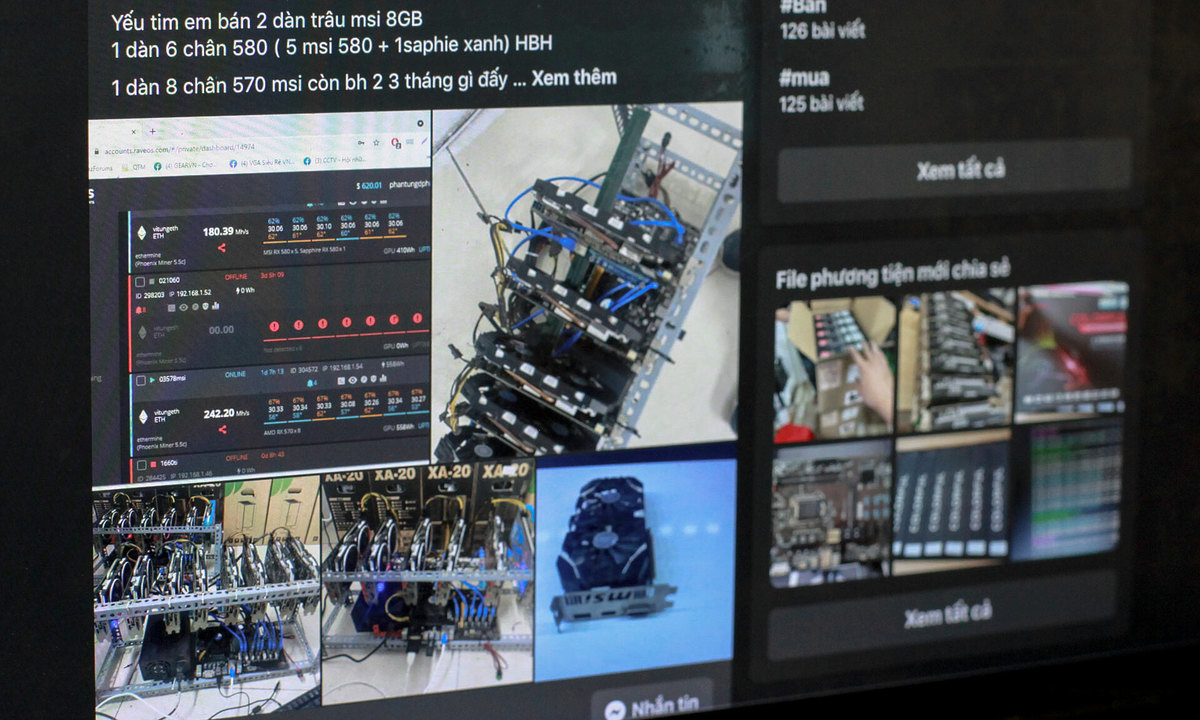 A tour of forums in cryptocurrency mining networks reveals that miners want to sell their computers, graphic cards and the like.

A post by Chi Hung on a major online group for cryptocurrency mining says: “I can’t keep up with the trend any longer, so I want to sell my 1060 6G graphic card to whoever wants it. Negotiable prices.”

Ngoc Van, an administrator of a site that sells cryptocurrency mining tools, said the number of people looking to sell their gear is higher than those looking to buy.

“Most sellers are small-scale miners. After they have recouped their investments, they would want to liquidate their assets to book profits.” They fear that if the market starts to tumble their equipment would sit on the shelf as happened during a previous Bitcoin bust a few years ago, he said.

Sinh Le, who works for a major supplier of cryptocurrency mining equipment in HCMC, said there are two reasons for the sell-off.

“Firstly, Vietnamese miners mainly focus on Ethereum, but the difficulty in harvesting it has increased as more machines started to mine for it, leading to lower productivity and profits.

“Secondly, miners want to secure their profits early without any risk. So instead of continuing to mine, they flip investments instead.”

Many sellers believe the cryptocurrency market has reached a stage where small-scale miners without deep pockets are forced to sell their gear while large-scale ones continue to expand.

But selling the equipment is not easy: Several days after posting his ad, Hung has not found a buyer.

He explained: “Even a month ago if there was a post about someone selling their mining gear, people would immediately snap it up. But now there are too many sellers, while owners of large mining operations are stable. That means new miners do not dare jump in and selling the gear becomes very difficult.”

Other reasons for the inability to sell include high prices. HCMC tech retail chain Tin hoc Ngoi sao said miners once bought a set for VND5 million ($216.96) but now wish to sell it at five or six times that price, and people simply cannot afford it.

Minh Hieu of the southern Dong Nai Province, a veteran miner, said after spending VND500 million it would take around half a year for a miner to recoup the money provided cryptocurrency prices remain steady. But in the case of volatile items like Bitcoin and Ethereum, that might not be possible, he said.

“The demand is still there, but sellers need to price their gear appropriately. Graphic cards for mining are only sellable in the mining community, not to gamers, as the cards have been deteriorated significantly,” he added.