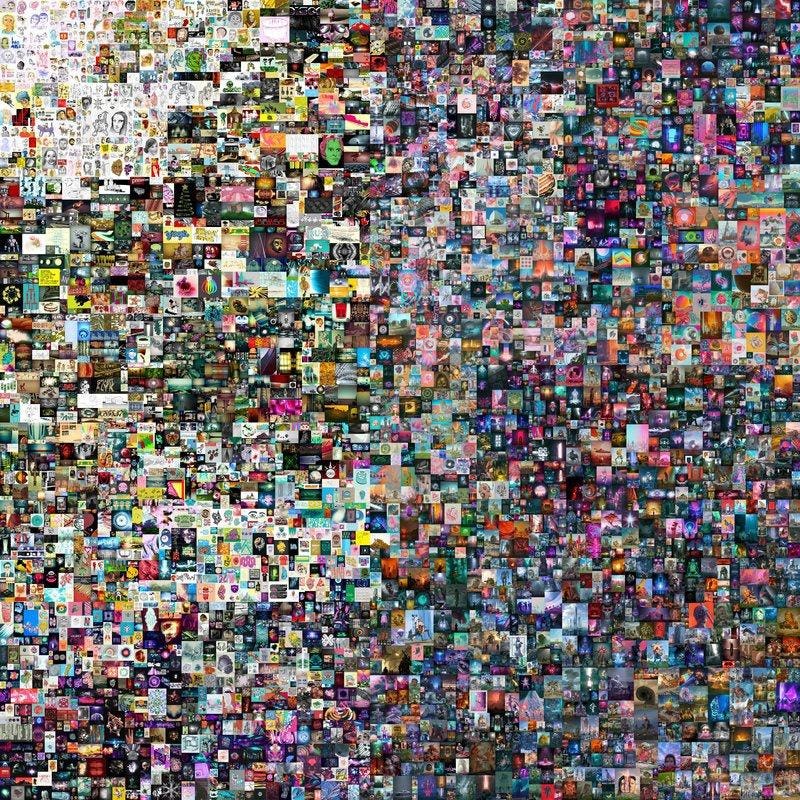 Neither cryptocurrency nor digital art have a physical presence, but both shook up the art world this week after Metakovan, the anonymous-pseudonymous founder of crypto-exclusive fund Metapurse, paid a staggering 38474.82 ETH ($69.3 million) for a JPG file of a digital photo collage made by South Carolina-based graphic designer Mike Winkelmann, who goes by the name Beeple.

“Metakovan’s use of Ethereum is a big win for cryptocurrency mainstream adoption. Ethereum could dominate the NFT (non-fungible token) marketspace and that could provide another key layer of underlying support. This is just the beginning of the craze for NFTs,” Edward Moya, a senior market analyst for world-leading online multi-asset trading services, currency data and analytics provider OANDA, said in an email interview.

Ethereum is an open-source, blockchain-based, decentralized software platform used for its own cryptocurrency, ether. Launched in 2015, the ether digital token (ETH) has ballooned into the second-largest cryptocurrency in the world by market value. NFTs are cryptographic assets with unique identification codes and metadata to differentiate each one. Unlike cryptocurrencies, such as ether and Bitcoin, they cannot be traded or exchanged at equivalency. Cryptocurrencies are identical fungible tokens used for commercial transactions in place of traditional paper money.

Besides auction giant Christie’s, which sold Beeple’s Everydays: First 5000 Days, an array of galleries, such as Nifty Gateway, SuperRare, MakersPlace, Foundation, KnownOrigin, and Async Art, are selling NFTs for ETH, an exchange of acronyms that befuddles both traditional trading and art markets.

“A vibrant digital economy is being built on Ethereum. Metakovan’s purchase of Beeple’s Everydays using ETH is another sign that ETH is emerging as a native currency for buying and selling digital goods. Hundreds of millions of dollars of digital art and collectibles are being bought and ETH is the main currency used to buy them,” Nate Maddrey, senior research analyst at Coin Metrics, founded in 2017 as an open-source project to determine the economic significance of public blockchains, said in an email interview. “The media coverage generated from Metakovan’s purchase will help introduce this emerging marketplace to more people, and likely attract new users.”

Christine Kim, a research analyst for CoinDesk who focuses on producing data-driven insights about the cryptocurrency and blockchain industry, agrees that the colossal Christie’s transaction is a “a huge step forward in user adoption for Ethereum and its native crypto asset, ether.”

“Unlike Bitcoin, which is increasingly held by institutional investors as a store of value, ether seems to be gaining legitimacy as a form of payment for digital artwork and the Ethereum network for the verification and sale of this kind of art,” said Kim in an email interview. “However, the hype around NFTs and NFT marketplaces as of late is also raising important questions and concerns about how this technology actually works and at times, doesn’t work. For example, do users know where NFT data lives and the proper ways by which to verify the authenticity of an NFT? Do artists understand how existing copyright laws may or may not apply to their NFT creations?  Standard practices for the purchase and sale of NFTs as well as education around the mechanisms that make them work on Ethereum will be key for this hype to mature and have long-lasting impacting on the traditional art industry.”

Just as hedge fund managers and other stock market trading giants funnel billions in gains into the blue-chip art market, crypto traders are fueling the burgeoning NFT market. Art as an investment class is an established practice, giving the buyers full ownership of a physical asset that can be displayed at museum and gallery exhibitions throughout the world. The pandemic forced museums, galleries, and art fairs to quickly adapt an agile approach to share their holdings with viewers and clients on digital platforms. No doubt the desire to view art in person will exceed previous appetites once the venues may safely reopen to large crowds.

“The art world still remains in shock, but this record setting $69 million auction completely validates NFTs going forward,” said Moya. “Artists will embrace NFTs as they will also benefit from future resales. NFTs will primarily benefit digital artists, but eventually it will intrigue more traditional artists to go digital. The majority of future NFT buyers will likely be crypto millionaires.”

Total crypto art value was estimated at more than $317 million (179,884.785 ETH), with some 114,738 artwork sold as of March 1, according to data from Cryptoart.io, which tracks sales across six auction houses.

“Metakovan’s purchase likely won’t have an immediate, short-term impact on ETH price. It’s still a small drop in the bucket of the amount of ETH traded on a daily basis. But over the long run it may help lift the price as more and more newcomers start buying ETH to purchase NFTs and other digital goods,” said Maddrey.

As more artists dabble in digital art hoping for a chunk of this emerging market, there’s a long journey before deer-pocketed crypto holders meander into the physical art world. NFTs challenge the importance of provenance in masterworks and physical artworks that often change hands over time. Blockchain technology is already used to track physical artworks, acting as a digital record alongside ephemera and scholarship that adds to the value of decades- and centuries-old paintings, sculptures, drawings, and other physical works.

“I don’t think it’s likely that this will cause people to start using ETH or other cryptocurrencies to purchase physical art, at least not anytime soon,” cautioned Maddrey. “There are still some UX (user experience) issues that need to be worked out before we potentially see it being used to buy physical goods. But it will help usher in a new era of collectors of digital art, many coming over from the physical art world.”

Justin d’Anethan, sales manager at Diginex, a digital asset financial services and advisory company, said via a LinkedIn message, that there would be little impact from a transactional and price impact perspective. “Naturally if the seller receiving the ETH decides to sell, that could have a slight and short term impact,” he said.

“On a broader scale, what we are living through now is, in my opinion, a major shift in how people perceive not only art but also provable ownership and authenticity. Naturally, the purchase also legitimizes cryptocurrencies as a means of value transfer, and that’s very supportive,” said d’Anethan. “The fact that ETH was used instead of, say, BTC (Bitcoin) also specifically highlights the importance the second largest market cap coin has -and the fact that holders definitely are richer now following the massive price appreciation.”

“Maybe this new wave of crypto investors are/will be the high net worth individuals of tomorrow, the buyers of art,” said d’Anethan. “A generation might have bought an art piece with cash or gold bars, we’re now using digital coins from private wallets to hold art tokens secured on a blockchain.”