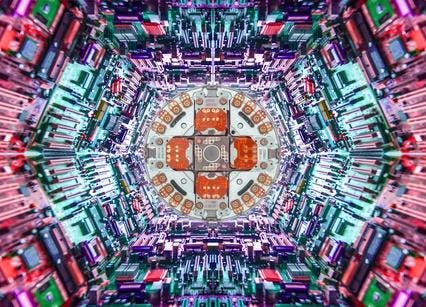 Software Hasn’t Eaten Wall Street Yet. But Ethereum And DeFi Might Be About To

“Software is eating the world,” wrote venture capitalist Marc Andreessen in 2011. And it did, with gusto.

Software has revolutionized some industries and undone others. Financial technology (fintech) software has been used by banks to digitalize the customer experience and speed up existing processes—apps have replaced branches and algorithms execute trades.

But software is now coming for Wall Street in the same way Facebook’s News Feed came for traditional publishers with the rise of blockchain-based decentralized finance (DeFi), designed to replace the role of banks with blockchain-based protocols—and at a time when macroeconomic conditions have left banks vulnerable.

DeFi—using cryptocurrency technology to recreate traditional financial instruments such as loans and interest—grew from a market of around $700 million in January, 2020 to $15 billion just a year later. In the first few months of 2021 the “total value locked” (TVL) in the DeFi market’s combined projects has more than doubled to around $40 billion, according to data from DeFi Pulse. TVL refers to the dollar value of all the cryptocurrency tokens locked in the smart contract of individual decentralized lending projects.

“There’s an energetic group of DeFi market participants that have grown it to $40 billion,” says Matthew Roszak, a billionaire venture capitalist and cryptocurrency investor, speaking over the phone. Roszak is the chairman and cofounder of blockchain technology development company Bloq and cofounded recently launched DeFi platform Vesper.

“DeFi early adopters, who call themselves degens (degenerates), are the testers, they’re the focus group. But it’s a real money focus group. Lots of real money is being poured into these systems that are high risk and high reward.”

So high are the DeFi risks, the community has its own name for them: Rug pulls—when project leaders that have promised sky-high returns disappear with the cryptocurrency tokens users have invested.

Just last week, DeFi project Meerkat Finance claimed to have been victim of a hack that drained the $31 million worth of cryptocurrencies it held—though some suspect users have been “rugged.”

Last summer, SushiSwap, a clone of the popular DeFi platform Uniswap created by an anonymous developer going by the name Chef Nomi, tried to tempt Uniswap users by offering them crypto-freebies. It worked and users flooded the platform with almost $2 billion worth of cryptocurrency tokens—only for Chef Nomi to attempt to cash out $14 million, sending the project into a tailspin (he later appeared to return the funds and now SushiSwap is bigger than ever).

Vesper, launched just last month and already attracting almost $600 million worth of cryptocurrency “deposits”, wants to make it easier to invest with DeFi—which, much like the wider cryptocurrency space, has struggled with simplifying the user experience over the last decade.

With Vesper, users are asked to invest their crypto, choose their risk preference and allow the platform to do the due diligence and collect interest, known as yield farming, for them. Users can invest—or “stake”—ethereum’s ether tokens, wrapped bitcoin on the ethereum blockchain, and USD Coin (USDC)—a dollar-pegged cryptocurrency called a stablecoin that mostly trades on ethereum.

“DeFi’s high yield that doesn’t exist in the traditional financial space is certainly alluring,” says Gaspar, speaking over the phone.

These kind of developments, coupled with the soaring value of cryptocurrencies in recent months and record low central bank interest rates around the world, mean investors are increasingly turning to DeFi—something that’s resulted in a perfect storm for banks, for which lower-for-longer interest rates are dragging on bottom lines.

“DeFi is eating financial services,” says Roszak, who doesn’t expect interest rates to return to pre-2008 levels any time soon. “I don’t see that transition back to traditional forms of yield. Crypto is a way to improve and people will be leaning into crypto in the near term enough that it sparks wider adoption.”

While Bianco accepts DeFi needs to evolve, calling it “buggy,” early investors are confident the momentum is there to solve these problems.

“People are coming to DeFi for different reasons,” says George McDonaugh, managing director at London-listed digital asset investment company KR1, speaking over the phone. KR1 took an early position in ethereum competitor polkadot, a bet that’s now paying off as developers fret ethereum won’t be able to scale sufficiently to handle the myriad of applications being built on top of it.

“It all feels like where we were in the early initial coin offering (ICO) days [before the late-2017 boom and 2018’s bust]. DeFi’s speculative aspect draws people in but they stay for the technology and its potential,” McDonaugh adds.

While the technology has proven attractive to cryptocurrency devotees, there’s a long way to go, and a lot of hurdles to overcome, before DeFi gobbles Wall Street.

MORE FROM FORBESLegendary Investor Reveals Bitcoin Fears After The Price Suddenly Soars Toward $60,000By Billy Bambrough

Boggiano expects that eventually the two worlds—of traditional, tightly regulated finance and of new and dynamic DeFi—will come together.

“There’s got to be a blend of the traditional banks and DeFi. Either it will be banks adopting DeFi or vice versa because, all of a sudden, we can attribute some real value to some of these DeFi protocols.”