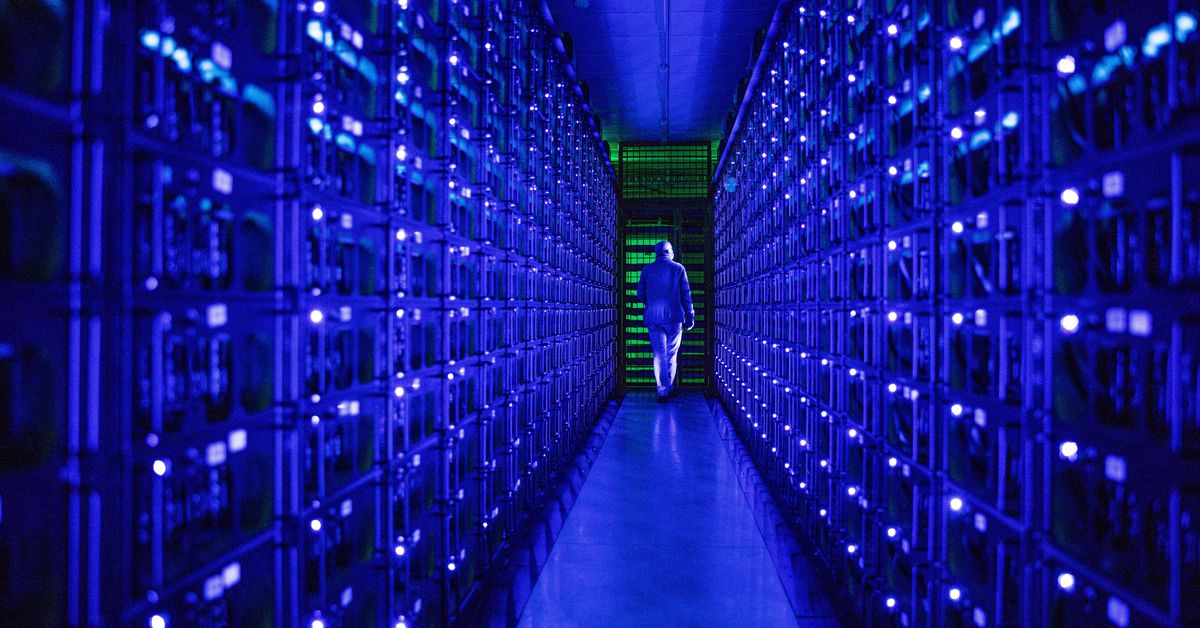 The climate controversy swirling around NFTs

Famed auction house Christie’s just sold its first “purely digital piece of art” for a whopping $69 million. For that price, the buyer got a digital file of a collage of 5,000 images and a complex legacy of greenhouse gas emissions.

Individual pieces of crypto art, non-fungible tokens (NFTs), are at least partially responsible for the millions of tons of planet-heating carbon dioxide emissions generated by the cryptocurrencies used to buy and sell them. Some artists — including those who have already benefited from the craze — think it’s a problem that can be easily solved. Others think the proposed solutions are a pipe dream.

ArtStation, an online marketplace for digital artists, canceled its plans to launch a platform for NFTs within hours after getting a lot of backlash from people who think dealing in crypto art is environmentally unethical. Artists called NFTs an “ecological nightmare pyramid scheme” and ArtStation’s plans to offset emissions a “scam” on Twitter.

ArtStation going into NFT and saying “but don’t worry! We’ll pay for carbon offsets” is the equivalent of setting a house on fire then placing a single potted plant on the burned property as “compensation”

Digital artist Mike Winkelmann, who goes by the name Beeple, is a believer in a more sustainable future for NFTs. His work “Everydays: The First 5000 Days” was the one that got the eye-popping $69 million bid at Christie’s. Moving forward, he says his artwork will be carbon “neutral” or “negative,” meaning he’ll be able to completely offset emissions from his NFTs by investing in renewable energy, conservation projects, or technology that sucks CO2 out of the atmosphere. “I think you’re gonna see a lot of other artists do the same,” Beeple tells The Verge. But for now, there are still greenhouse gas emissions associated with his NFTs. It costs about $5,000 to offset the emissions from one of his collections, he says.

The dirty world of NFTs

An NFT is a unique cryptocurrency token that can take the form of pretty much anything digital — art, a GIF, or even Twitter CEO Jack Dorsey’s first tweet. (For a more detailed look at what an NFT actually is, check out this breakdown.) There have been some initial estimates of how much power an NFT uses up and, consequently, how much planet-heating pollution that generates.

Take “Space Cat,” an NFT that’s basically a GIF of a cat in a rocket heading to the Moon. Space Cat’s carbon footprint is equivalent to an EU resident’s electricity usage for two months, according to the website cryptoart.wtf. That website used to let people click through the estimated greenhouse gas emissions associated with individual NFTs until creator Memo Akten took it down on March 12th. Akten, a digital artist, had analyzed 18,000 NFTs and found that the average NFT has a carbon footprint somewhat lower than Space Cat’s but still equivalent to more than a month’s worth of electricity for a person living in the EU. Those numbers were shocking to some people. But then Akten saw that the website had been used to wrongly attribute an NFT marketplace’s emissions to a single NFT. He took the site offline after he discovered that it “has been used as a tool for abuse and harassment,” according to a note posted on the site.

Since the crypto art craze is pretty new, none of the data that’s out there so far has been reviewed by outside experts. And Akten admits in a blog about his methodology that the analysis was intentionally “one-sided.” But here’s why there’s probably a hell of a lot of greenhouse gas emissions tied to NFTs: they’re largely bought and sold in marketplaces like Nifty Gateway and SuperRare that use the cryptocurrency Ethereum. Ethereum, like most major cryptocurrencies, is built on a system called “proof of work” that is incredibly energy hungry.

Proof of work acts as a sort of security system for cryptocurrencies like Ethereum and bitcoin since there’s no third party, like a bank, that oversees transactions. To keep financial records secure, the system forces people to solve complex puzzles using energy-guzzling machines. Solving the puzzles lets users, or “miners,” add a new “block” of verified transactions to a decentralized ledger called the blockchain. The miner then gets new tokens or transaction fees as a reward. The process is incredibly energy inefficient on purpose. The idea is that using up inordinate amounts of electricity — and probably paying a lot for it — makes it less profitable for someone to muck up the ledger. As a result, Ethereum uses about as much electricity as the entire country of Libya.

When someone makes, buys, or sells an NFT using Ethereum, they’re responsible for some of the emissions generated by those miners. What’s still up for debate is whether NFTs are significantly increasing emissions from Ethereum or if they’re just taking on responsibility for emissions that would have been generated by miners anyway. Without NFTs, miners would still be plugging away at puzzles and polluting. And NFTs are still a relatively small portion of all Ethereum transactions.

Figuring out the culpability of NFTs is a little like calculating your share of emissions from a commercial plane flight, according to Joseph Pallant, founder of the nonprofit Blockchain for Climate Foundation. If you’re on the plane, you’re obviously responsible for a portion of its emissions. But if you hadn’t bought the ticket, the plane probably would have taken off with other passengers and polluted the same amount anyway.

Individual behavior becomes a bigger problem, though, when it drives trends. If enough people decide to start flying who weren’t planning to before, an airline might decide to operate more flights — which means more emissions overall. “Many NFT transactions send a stronger economic signal to the miners which may lead to increased emissions,” Susanne Köhler, a PhD fellow who researches sustainable blockchain technologies at Denmark’s Aalborg University, said in an email. If NFTs significantly push up the value of Ethereum, miners might try to cash in by upping how many machines they use. More machines generally mean more pollution. (And even if new machines are better at solving puzzles, making them more energy-efficient, proof-of-work puzzles are designed to get progressively more difficult. Again, the system was designed to keep things inefficient.)

There are other strategies for keeping a blockchain secure that might not be as hard on the planet. The most popular alternative to proof of work is a system called “proof of stake.” NBA’s Top Shot, the marketplace where basketball fans can buy NBA highlights as NFTs, operates on the Flow blockchain, which is an example of an arguably more centralized blockchain running on the proof-of-stake model. This system still requires users to have some kind of skin in the game to dissuade bad behavior. But instead of having to pay for huge amounts of electricity to enter the game, they instead have to lock up some of their own cryptocurrency tokens in the network to “prove” they’ve got a “stake” in keeping the ledger accurate. If they get caught doing anything fishy, they’ll be penalized by losing those tokens. That gets rid of the need for computers to solve complex puzzles, which, in turn, gets rid of emissions.

Ethereum has said for years that it will eventually switch to proof of stake. That’s what crypto art optimists are hoping for.

“That would essentially mean that Ethereum’s electricity consumption will literally over a day or overnight drop to almost zero,” says Michel Rauchs, a research affiliate at the Cambridge Centre for Alternative Finance.

The problem is that people have been waiting for years for Ethereum to make the change, and some are skeptical that it ever will. First, Ethereum will have to convince everyone that proof of stake is the way to go. Otherwise, the whole system could collapse.

“If not everyone agrees to that change, you’re going to be in a situation where the network just falls apart,” says economist Alex de Vries. “It can literally break into multiple chains if not everyone runs the same software. That’s the downside of trying to upgrade public blockchains like Ethereum.”

Private blockchains do exist, and some, like Flow, are completely devoted to NFT transactions, allowing them to sidestep some of the issues with cryptocurrencies like Ethereum. But those kinds of blockchains move away from what cryptocurrencies were supposed to do in the first place, which is create a decentralized network where anyone can make transactions without the oversight of a single institution.

There are other ways to bring down emissions from NFTs and keep a more decentralized proof-of-work network. One potential solution is to build out another “layer” on top of the existing blockchain. Working on this second layer can save energy because transactions happen “off-chain” — away from the energy-intensive proof-of-work process. For example, two people who want to trade NFTs might open up their own “channel” on the second layer where they can make a virtually unlimited number of transactions. Once they’re done doing business, they can settle up the net result of their transactions back on the blockchain, where it can be added to the verified ledger via the proof-of-work process. You’re essentially bundling or netting a whole bunch of transactions into just a few that need to take place on the inefficient blockchain, which ultimately saves energy. The bitcoin Lightning Network, launched in 2018, is an early example of a “second layer.”

Then there’s the most straightforward solution to the emissions problem of NFTs: clean energy. If more cryptocurrency machines run on clean energy, emissions go down. This is starting to happen, but there’s still not a clear picture of how much cryptocurrencies are mined using renewables. For bitcoin, in particular, for which there’s the most research, the estimates vary wildly — from 35 to 80 percent. Some experts, like de Vries, have argued that relying on renewable energy isn’t a perfect solution for proof-of-work cryptocurrencies either. If mining for tokens continues to be extremely energy intensive, it will continue to put pressure on electricity grids and eat up renewable energy that could otherwise go toward something arguably more urgent — like heating or lighting homes.

While people try to hash out the kinks in all of these proposed solutions, the climate crisis grows more dire every day. Against the very real backdrop of climate-related disasters, there will still be people who refuse to participate at all in a system that they think is inherently harmful and environmentally destructive.

On the now-defunct page of cryptoart.wtf, a note points readers to GitHub pages and essays that guide people through carbon footprint calculations and current thinking on the topic. “CryptoArt is a tiny part of global emissions,” the note reads. “Our actions in this space is a reflection of the mindset that we need in our efforts for larger-scale systemic change.”

All of the potential fixes to the climate pollution problem of NFTs are in the works to varying degrees, but they haven’t been widely adopted yet. Still, a lot of artists — and even some environmentalists — are optimistic about crypto art. “I think in the next year, year and a half, the emissions will be a non-issue,” says Blockchain for Climate Foundation’s Pallant.

Ultimately, artists are the ones pushing the most for change. If marketplaces for NFTs don’t start to meet their demands, artists could start minting their NFTs on marketplaces using cleaner cryptocurrencies. There’s already an artist-led effort to raise money to reward people who can figure out new ways to make crypto art more sustainable. Anyone who wants to support those artists by buying their work can migrate along with them to less polluting platforms — or maybe just buy a physical copy of their work.

Elizabeth Lopatto and Jacob Kastrenakes contributed to this report.